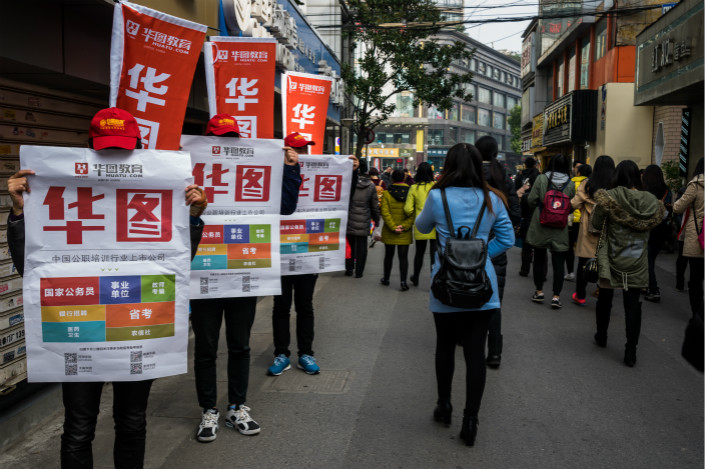 If either of the pair succeeds in going public, it will be the first IPO among several training centers that help candidates prepare for China’s highly competitive annual civil service exam and similar tests to work as a police officer or teacher.

In December, 1.13 million candidates took exams for 28,500 positions in China’s national-level government, according to the Ministry of Human Resources and Social Security. Only one out of 40 will obtain such a position, called an “iron rice bowl” in China because of the job’s perceived stability.

The training centers have thus attracted many anxious examinees. Huatu, the largest in terms of revenue last year, according to consultancy Frost & Sullivan, made 2.24 billion yuan ($356 million) in revenue in 2017, up 18.5% from a year before. Huatu ran nearly 400 tutoring centers in China at the end of last year.

Offcn, meanwhile, has offered to sell itself to Shenzhen-listed Yaxia Automobile Corp. for up to 20 billion yuan to complete a backdoor listing in Shenzhen. Offcn had unaudited revenue of 4 billion yuan in 2017, according to a Yaxia filing. Offcn operates 1,000 centers across the country, its official website said.

Trading of Yaxia shares has been suspended since January, when it announced it intended to “buy some assets in the education industry.”

Yaxia shareholders approved the deal on the last day of March, and the company disclosed that the assets were Offcn. Yaxia said on Tuesday that the deal is “actively progressing,” but that “uncertainties still exist.”

Huatu’s path to going public has been even more thorny. Its initial attempt in 2012 to list in the Chinese mainland failed because the securities regulator temporarily stopped accepting IPO applications. Two more attempts at backdoor listings, in 2015 and 2017, also collapsed.

Huatu chose to list on China’s largest over-the-counter stock-trading platform, the National Equities Exchange and Quotation, in 2014. After raising 880 million yuan in three and a half years, it delisted from the board this February.