Tesla To Recall 8,898 Cars in China Over Corroding Bolts 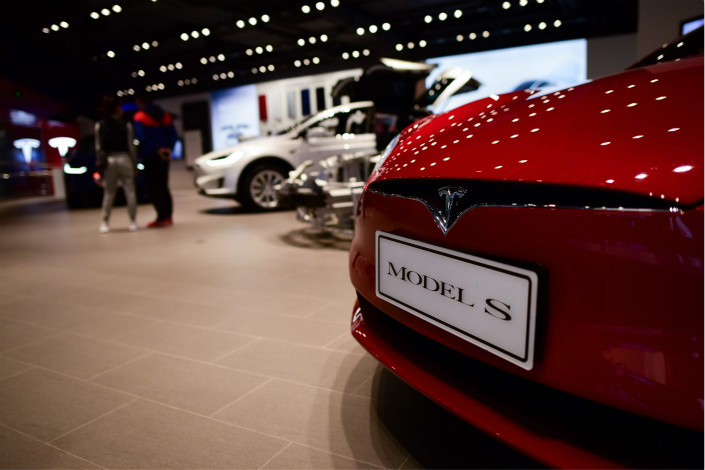 Tesla Inc. vehicles are displayed in a Beijing showroom on Monday. Photo: VCG

The recall will involve a total of 8,898 Model S vehicles produced between September 2013 and April 2016, according to a statement (link in Chinese) posted Monday by the General Administration of Quality Supervision, Inspection and Quarantine.

“These vehicles’ bolts could corrode when they are exposed to erosive chemicals contained in industrial salts used in melting snow on the road, leading to a loss of power steering assistance,” the statement said.

The move is part of its global recall announced on March 29 that involves about 123,000 Model S vehicles to replace bolts in the power steering component. It said the issue has not caused any injuries or accidents, and drivers may continue to drive their cars without the need to rush to get a replacement.

Drivers will be contacted for a retrofit, which will take about an hour, when the parts are available in their regions, it said.

Model S vehicles produced after April 2016 are not affected as the maker had switched to other suppliers for the steering racks, the Chinese consumer product quality watchdog said.

German carmaker Volkswagen AG said last month it is recalling 331,000 Touareg vehicles manufactured from December 2014 to November 2017. That move came after the watchdog found out the drain valves do not allow water to clear out of the engine properly, potentially leading to safety problems.

Tesla has pinned big hopes for the Chinese market, where Beijing has offered generous subsidies to support the fledgling sector.

In 2017, Tesla sold 14,883 vehicles in China, accounting for 17% of the maker’s total revenue, according to data compiled by Bloomberg.

The California-based company is now negotiating with the Shanghai government to build a production facility there to help it avoid the 25% levy imposed on car imports.