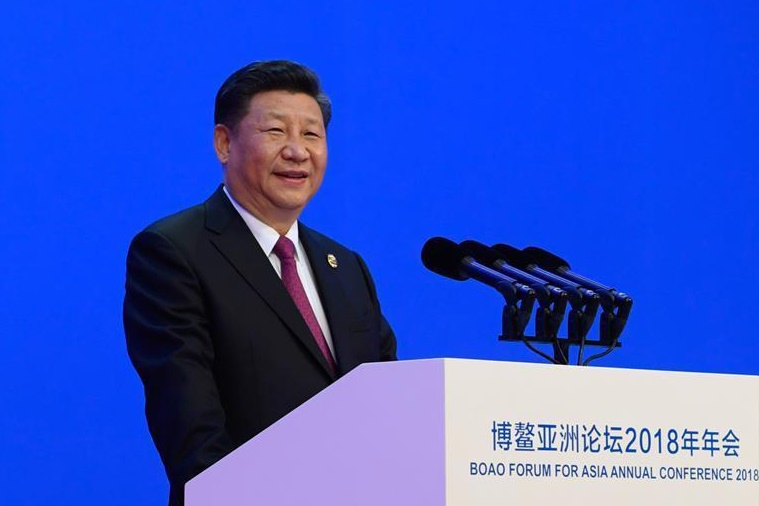 President Xi Jinping addresses the opening ceremony of the the Boao Forum for Asia Annual Conference, an economic event held in the country’s southern province of Hainan. Photo: Xinhua

The Chinese president pledged measures to further expand market access and create an easier business environment to foreign investors, strengthen protection of intellectual property rights and increase imports. His remark sent a clear message to the world at a crucial time that China will continue its commitment of greater openness.

China made “opening up” a national policy in 1978. It continues serving as the effective strategy for the country to cope with challenges that emerged from social and economic development. Maintaining the continuity of the policy is the best way to commemorate the 40th anniversary of its landmark economic reforms.

China’s economy is shifting from fast growth to a new era of high quality development. As Xi said in his speech, China’s economic development has benefited over the past 40 years by opening up. As the country seeks to achieve higher quality growth, it will continue along the path of greater openness. China’s opening up is also entering a new phase to pursue higher quality. The best way to examine the effects of opening up policies is to see how much they have promoted the country’s economic transformation, structural adjustment and streamlined the system to allow the market to play the decisive role in resource allocation.

Opening up should benefit business and people of China and the rest of the world. And they are the best judges of the policies’ effects.

To pursue high quality opening up meets China’s internal demands. Since the 18th Party Congress, the country has been committed to pushing forward structural reform and deepening reforms in a comprehensive manner. But there are still challenges as the country strives to reform its government, improve the business environment, enhance rule of law and liberalize state-controlled sectors. In his speech, Xi pledged major measures to address the issues, including accelerating opening the financial sector by easing control over foreign investment in Chinese financial institutions and allowing them a greater business scope. These measures are in chord with China’s ongoing financial sector reforms.

As China’s economy grows stronger, it also bears greater expectation from the international community, including demands of further opening up of its market. China should be confident that it is ready for greater openness. Take the manufacturing industry as an example, China currently still have limits on foreign investments in few sectors such as automobile, shipbuilding and aircraft, but as Xi said, the sectors are able to embrace greater openness. China will speed up to relax restrictions on foreign investors’ shareholding in car manufacturing joint ventures and other sectors, the president said. A greater openness will mutually benefit China and other countries.

Xi’s speech is delivered at a crucial time when trade tensions between China and U.S. intensify. Although the president didn’t mention the trade disagreements in his speech, he has sent the message that the issues should be solved through dialogue rather than confrontation. What Xi said signals that China is willing to address U.S. concerns amid heightened bilateral trade tensions. For instance, Xi promised better protection on intellectual property rights and harsher punishment for violators, echoing the U.S. demands.

China’s reform and opening up over the past 40 years have been pushed forward by both internal and external momentums. Forces from the outside world sometimes played a key role for policymakers to achieve breakthroughs in stalled reforms. The accession to the World Trade Organization in 2001 is a good example. The ongoing trade disagreement with the U.S. may also offer a good opportunity for China to gear up its reform pace, if it is handled properly.

It is worth mentioning that opening up to the outside world should keep pace with domestic market liberalization to allow private sectors to grow. Although policymakers have emphasized their intent to expand market access to private investors, doing business is still challenging for private investors in many areas. Governments at all levels should respond to private business’ demands carefully, because only with a strong private sector can China confidently embrace the outside world.

In 40 years since the reform and opening up, China has become the world’s second-largest economy. Now, the country is facing a new phase of opening to wider and deeper scales. The president has promised to put the measures into reality “sooner rather than later,” and it is time for all government agencies to act quickly to make things happen.