By Ke Baili and Leng Cheng 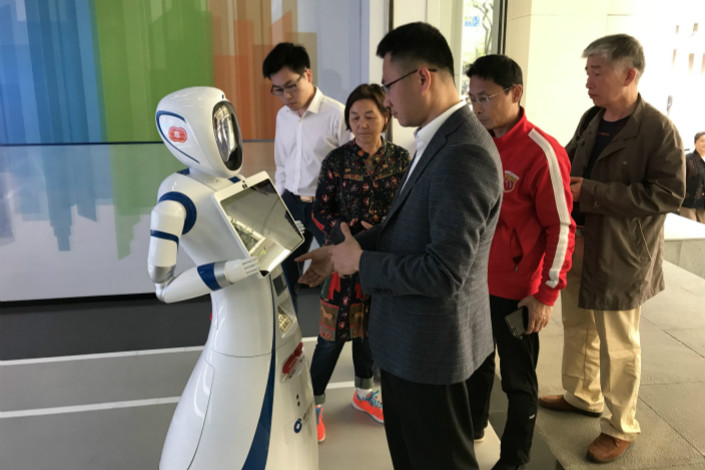 A visitor browses a tablet held by a robot teller at China Construction Bank’s unmanned branch in Shanghai on Wednesday. Photo: Leng Cheng/Caixin

China’s second-largest lender has opened a branch staffed by two robots and no humans after cutting nearly 10,000 workers last year.

China Construction Bank (CCB) claims its new branch on Shanghai’s Jiujiang Road is the country’s first fully automated bank. A robot at the doors greets customers, speaking through a female face encased in a shiny plastic helmet. It clutches a touchscreen tablet to its chest for customers to use. Slots for bank cards are sunk into its waist.

To enter the bank, customers simply slide their ID card, and their face, through scanners. Inside, another robot in the hall answers simple queries. A virtual-reality room showcases the building of a house, promoting CCB’s latest move into the rental housing market. Beyond automatic telling, there are machines for exchanging foreign currency, issuing new bank cards and paying off credit card debt.

Those in need of wealth management services can still enjoy interactions with other humans, if only by video link to bank staff in another location.

Two volunteers from CCB are helping out at the branch for the first few days. But when the number of customers and gawkers declines, they will leave the robots on their own. However, the robots may struggle to fully satisfy curious customers, with one complaining that it is “just a little girl.”

The branch is more entertaining than functional, said Hu Biao, a finance blogger visiting the bank, although automated foreign-exchange machines are new, he acknowledged. “You also have to consider elderly people, who often don’t know how to use all the digital gadgetry,” he said.

Indeed, one local couple in their 60s refused to go in, telling Caixin that the new bank was for young people.

But young people are more likely to be accessing financial services on their phones than entering a bank branch. CCB reported a 157% jump in personal consumer loans last year — and the growth was accounted for entirely by its online platform, CCB Kuaidai.

The bank has cut nearly 20,000 employees since the end of 2014, and layoffs seem to be accelerating. It lost 9,861 employees last year, according to its annual report, equivalent to 2.72% of its total workforce.

Automation is taking off across financial services. Major securities brokerages in China, including GF, Ping An and Everbright, have launched investment advisory services powered by artificial intelligence.

There’s a similar trend across the Pacific. Last year, Bank of America opened several unmanned branches, according to a report by Reuters.

At the end of the day, the finance industry is a service industry, a health insurance manager visiting the bank told Caixin — so it should try to provide customers with better experiences.

Looking at the new branch, she said she felt a mixture of pleasure and concern. In the future, junior salespeople will gradually be replaced by machines, she said. Only tailor-made professional services will need humans to be involved at all.