By Cheng Zijiao and Denise Jia 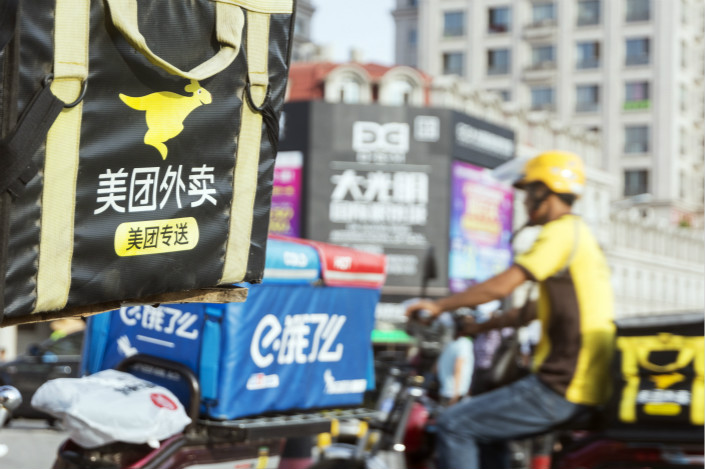 China’s three dominating food delivery platforms are under investigation for claims of unfair competition in an escalating turf war.

The commerce administrator of Wuxi, a city of around 7 million residents in eastern China's Jiangsu province, said it has received complaints from merchants criticizing the food delivery service of China’s largest online-booking platform Meituan-Dianping and Alibaba Group-backed Ele.me for unfair market practice.

The complaint letters alleged that some restaurants listed on Didi Waimai, a new market entrant and the food delivery arm of China's ride-hailing giant Didi Chuxing, were pulled off from Meituan and Ele.me, the two largest food delivery platforms in China.

The Wuxi Municipal Industry and Commerce Administration said it is investigating the matter and the preliminary probe found the companies are involved in unfair competition and monopolistic practices.

Meituan told Caixin that it suspended some merchants based on users’ complaints and delivery speed in order to protect users experience on its platform.

Without naming Didi Waimai, Meituan said a rival platform used unreasonably generous subsidiaries to attract users in Wuxi, resulting in a large number of “irrational orders” from consumers that some restaurants couldn’t handle.

Didi Waimai on Monday officially launched in Wuxi and handed out huge discounts to new users on the first day. Some users showed their receipts on social media, bragging about a meal costing as low as one cent.

Didi Waimai said it handled 334,000 orders in its first day of business, claiming itself the top food delivery firm in the city. Meituan and Ele.me quickly followed to offer their own subsidiaries.

Meituan Regional Director An Zhongjie questioned Didi Waimai’s number on social media, saying that it is impossible for Didi Waimai to handle hundreds of thousand orders a day with fewer than 1,000 delivery men.

In response to Caixin’s inquiries, both Didi Waiwai and Ele.me said they support the government’s regulations on fair competition.

Wuxi commerce administration said it would launch deeper probe into the three platforms and punish the violator if any improper anti-competition practice is confirmed.

Last August, Meituan was fined 526,000 yuan ($83,800) by the market supervising authority of Jinhua, a city in eastern Zhejiang province. Meituan was accused of violating fair competition by forcing merchants on its platform to stop working with rivals.

The latest episodes reflect the heating battles among China’s online services providers. According a recent report by data company DCCI, Meituan was dominating the food delivery market with 53.9% market share in 2017, followed by Ele.me with 29.8%.

While Didi is trying to grab Meituan’s market share in the food delivery industry, Meituan is also stepping into the ride-hailing market, Didi’s core business.

Meituan has rolled out ride-hailing services in Nanjing and Shanghai, and plans to be in at least seven Chinese cities, including Beijing. The move is expected to complicate the fiercely competitive sector and ignite potential price war with Didi.

Apart from ride-sharing and food delivery, the two companies are going head-to-head in bike-sharing as well.

Earlier this month, Meituan agreed to acquire leading shared-bike startup Mobike in a deal valued at $2.7 billion. Didi is the biggest shareholder of Mobike’s archrival, Ofo. It has also debuted its own branded bike-sharing service in Chengdu, the capital of southwest Sichuan province.