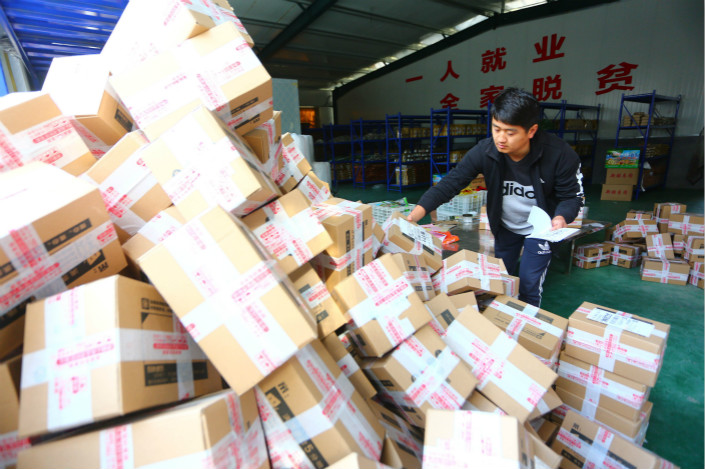 An e-commerce logistics center in a rural part of the Shandong province city of Zaozhuang. Photo: VCG

Chinese e-commerce giant Alibaba Group Holding Ltd.’s latest push to access the country’s vast rural market has arrived in the form of a 4.5-billion-yuan ($716 million) investment in an e-commerce firm that focuses on people living in villages.

Alibaba is poised to join hands with Huitongda Network Co. Ltd. to explore partnerships across supply chain management, e-commerce technology know-how, warehousing and logistics that will “help build an ecosystem and commerce infrastructure servicing rural areas,” Alibaba said in a statement to Caixin on Tuesday.

The move will help Huitongda further expand its presence into rural finance, health care, tourism and entertainment, it said.

Huitongda is an e-commerce platform founded in 2010 by Five Star Holdings Group, which started as a chain store selling household appliances and consumer electronics.

Huitongda has cooperated with tens of thousands of mom-and-pop shops in the countryside by helping them order goods online and set up a web presence. It currently has 80,000 member stores spread across 18 provincial-level areas.

The deal comes in line the “Rural Taobao” initiative Alibaba launched in 2014, which aims to make it easier for rural people to sell and buy products online. The project has now brought in more than 1 million online retailers from the countryside across 29 provincial-level areas.

Alibaba CEO Daniel Zhang said Tuesday one of the three major corporate strategies for the next two decades will be to develop businesses in the countryside.

Rural e-commerce, which is on a faster track than its urban counterpart, has been seen by retailers as the last opportunity to seize in China’s maturing e-commerce sector.

In the first nine months of 2017, the online sales of village shops grew 38.3% to 836 billion yuan ($133.1 billion), 5.6 percentage points more than that of their urban peers, according to data from the Chinese Academy of Social Sciences.

Alibaba’s rival JD.com Inc. has similar strategies. In April last year, JD.com Chairman and CEO Richard Liu announced the company will open 1 million convenience stores in five years, half of which will be located in the countryside.