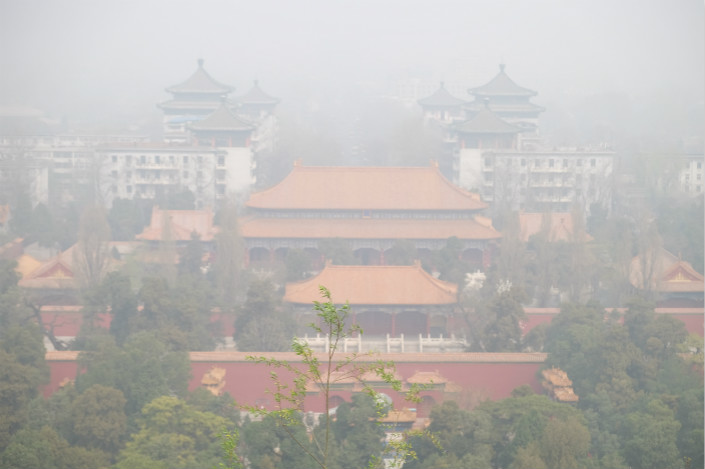 Air quality in part of northern China — famous for its smog — deteriorated significantly in March, promoting policymakers to worry that China’s war on pollution might have reached a “strategic stalemate.”

The area that includes Beijing, Tianjin and the northern province of Hebei recorded only 16 healthy “blue-sky” days in March, a sharp decline from the 21 such days in the same month a year ago, statistics from the Ministry of Ecology and Environment showed.

China has struggled for the last decade to contain a pollution problem that has been faced by many countries with rapid industrial growth. Weather patterns make the problem particularly acute in the areas around Beijing, causing smog levels to often rise to an unhealthy range at certain times of the year.

“We’ve achieved much from a great deal of work we’ve done in the past, but still stopped short of public expectation for clean air,” ministry spokesman Liu Youbin said at a news conference in Beijing on Thursday. “Our air quality could still fluctuate from time to time due to changes in temperatures, climate conditions in particular.”

Air quality in China is considered excellent when the Air Quality Index, which is weighted using six major pollutants, is below 50. Below 100 is also considered good, and is the cutoff for what is considered a “blue-sky day.”

The average level of PM2.5, a key pollutant of tiny particles that are capable of lodging deep into the lungs and which are linked to lung cancer and other medical conditions, soared by 27% year-on-year to 80 microgram per cubic meter of air in March, the ministry said. The concentration of PM10, another cancer-causing pollutant, was up by nearly 22% to 134 micrograms per cubic meter of air.

In the Chinese capital, weather conditions in March were some of the worst for pollution in the past six years, with weak wind, little rain and unusually high temperatures.

The smoggy March was particularly disappointing for Beijing’s 21.7 million dwellers who enjoyed a largely smog-free winter in 2017, a rarity in recent years.

The ministry attributed the surprisingly good winter air quality to a four-year clean-air campaign from late 2013 to 2017, which saw nearly 200,000 industrial plants closed for violating clean air rules. But some more draconian measures have also created controversy at times. This past winter saw rural residents in areas near Beijing forced to live in the cold after their coal-fired stoves were ordered dismantled before new gas heat meant to replace them were in place.