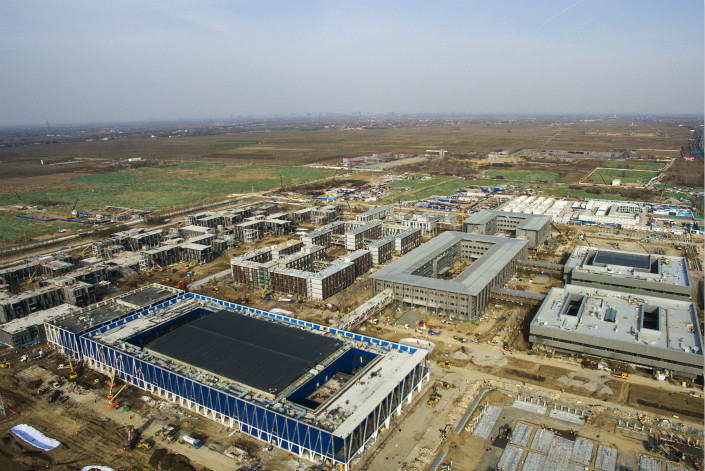 China last week approved the master plan for the upcoming Xiongan New Area, which lays out a blueprint for a pleasant, modern and green urban environment.

As I studied the official documents, a few points caught my attention.

The first point is the focus on the organized implementation of the master plan.

The State Council’s remarks on the master plan call for “strengthened organized implementation of the plan,” and described the Xiongan New Area as the “inheritance we will leave for future generations.” It said that the plan must be “strictly implemented,” and that “no department or person must amend or modify it illegally.”

The master plan says the city will cover 1,770 square kilometers (683 square miles), and calls for construction to proceed in phases, building outward in a “steady and orderly manner” from a designated early development area when “conditions are ripe.”

In 2016, China’s State Council issued a document on strengthening urban planning and construction, which called for urban planning to be done in accordance with the law and required that parties involved be systematically prevented from arbitrarily altering plans.

The 2016 document required that “blueprints be thoroughly realized” while offering a clear process for altering plans when necessary. By my understanding, this means later generations should not radically change the reasoning of the original plan and start over, which would be a waste. But at the same time, the blueprint left behind by predecessors can be revised and perfected based on changes in circumstances.

The second major takeaway from the Xiongan New Area master plan is the concept of building a livable and pleasant city.

The State Council’s response to the master plan called for “service facilities of different levels” to be distributed along the city’s major streets and throughout its neighborhoods, to “meet the requirements of a work-life balance,” creating a “multilevel, comprehensive, humanized network of basic public services.” According to the master plan, the Xiongan New Area will give priority to residential developments in the land surrounding railway stations and major thoroughfares. In areas that are more commercially valuable, space must still be made for mixed-use residential spaces “to achieve a work-life balance within a reasonable public transport radius.”

The concept of land zoning, pioneered by Frankfurt, Germany, in 1891, has previously been overapplied to urban planning. Even though zoning, which spatially separates the functions of a city, is helpful in concentrating capacity and managing cities, it has also caused inconvenience, traffic congestion, pollution, and underutilization of land. For instance, commercial areas are frequently used only during work days, and left empty on weekends and holidays.

After the 1980s and 1990s, the concept of “work-life balance” became increasingly popular in planning circles. Under this concept, within a given area of a city, the number of residents and the number of jobs available should be roughly equal, and most residents should be able to live near their workplaces. This is a concept that has also been incorporated into Beijing’s own municipal plan for 2016 to 2030. Achieving a work-life balance will help reduce pollution and commute lengths, increasing the quality of life.

The State Council’s remarks on the Xiongan master plan say that “in principle, there should not be skyscrapers. There should not be glass walls and concrete jungles everywhere.” The master plan itself says that authorities will “strictly control the height of buildings,” although there will still be high-rise buildings in specific areas to house commercial and financial functions.

The benefit of restricting the construction of high-rise buildings is that the urban landscape will be more pleasant and more harmonious. But this will place pressure on the supply of housing, and raise the cost of building residences and workplaces. So it would still be rational to build some skyscrapers within specially designated areas.

When it comes to housing, the master plan calls for a “reformed and innovative housing system” that “insists housing should be used for living, rather than speculation.” According to the plan, the New Area will establish a diversified housing system that incorporates both rental and purchasing of property and takes into account a diversity of housing needs while being led by the market and guided by government.

Previous plans for the Xiongan New Area suggested that the area’s property market would be rental-only. The master plan tells us clearly that residents will also be able to purchase homes. I believe this is the practical thing to do. I have never heard of a city in a market-economy country where residents were not able to buy and sell property. If residents and businesses were not allowed to own property, this would cause a series of problems. Not only would they be unable to share in the benefits of rising real estate prices, but they would also lack one of the most important forms of collateral for financing.

At present, the greatest fear is that speculation might take over Xiongan’s property market. The new area might benefit from considering Germany’s management model for its property market, including higher taxes on transactions and property ownership. Xiongan could increase down-payment requirements and strictly cap rents to curb real estate speculation while allowing long-term community builders to share the fruits of urban development and have a sense of belonging.

The third major theme of the government’s master plan for Xiongan is attracting talent and capital. According to the master plan, authorities in the New Area should explore and implement policies that are conducive to innovation, including personal income tax reform and easier entry for skilled foreigners. At the same time, the area should support pilot programs for financial innovation that comply with laws and regulations, according to the master plan.

The Xiongan New Area master plan contains new concepts and gives the new area a good starting point. But the implementation of this plan will still be a long and slow process. A city is a constantly growing and changing organism, and its competitiveness comes primarily from attracting talent. In the process of building and developing the city, planners must solve the problem of financing. Xiongan must gather talent and capital through new ways of thinking and new systems and mechanisms. Xiongan’s growth will depend on the continued effort of all parties to build its “modern industrial system of collaboration between the real economy, technological innovation, modern finance, and human resources.” I hope that Xiongan will become a model for China’s high-quality development in its new era, and will become a model city for future human development.

Zhou Qiong is the general manager of strategic development at the Postal Savings Bank of China.