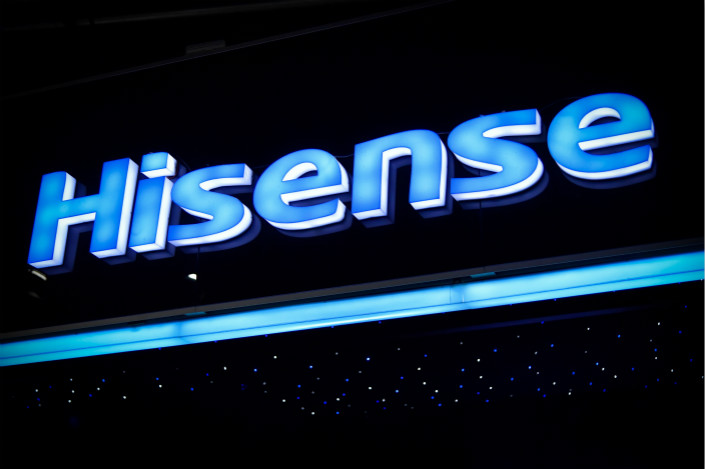 Electronics manufacturer Hisense has set up 300 automated retail stores in China for its partner Auchan since September. Photo: IC

*Company takes a simpler, scalable approach to automated retail, spurning cutting-edge technology that may not yet be practical

*Hisense says it is in talks to roll out its automated stores in Taiwan, France and Russia

(Qingdao, Shandong) — Ever since U.S. retail giant Amazon.com Inc. showcased its groundbreaking Amazon Go self-service shop in 2016, more than 100 Chinese companies from all kinds of sectors have tried similar experiments.

Hisense Co. Ltd., the Qingdao-based state-owned electronics manufacturer best known for its televisions and air conditioners, has also jumped on the automated store bandwagon, with 200 of its employees working around the clock from May 2017 to open its first location in September.

Similar to other cashier-less store models, patrons enter Hisense’s 18-square-meter (193 square feet) steel boxes by scanning a QR code at the entrance. They can then pick up their favorite items — from snacks to fizzy drinks — and pay at checkout with their smartphone.

So far the company has launched more than 300 such stores in 33 Chinese cities under the brand name of its retail partner Auchan. It replaced Auchan’s original technology vendor, BingoBox, after their automated stores suspended operations as their shelves and glass exterior couldn’t withstand summer temperatures and excessive heat damaged products.

“There were more than 1,000 technological obstacles that we had to overcome,” Yuan Dongliang, marketing director of the Hisense automated store project, told Caixin.

Caixin spoke with Yuan about the current smart retail landscape and its future. The following excerpts from the interview have been translated from Chinese and edited for length.

Caixin: Why did Hisense get into automated retail?

Yuan Dongliang: It was because of Amazon Go. People may be surprised that Hisense, a television-maker, can do this. They may not know that Hisense has for years supplied retail technology, such as cash registers and goods management systems, to various supermarket chains. We have a more than 60% share of the cash register market in China. So we have accumulated a lot of experience in this industry.

Was it hard to develop an automated convenience store from scratch in just four months?

It was really tough, in terms of technology and coordination. There were more than 1,000 technological obstacles that we had to overcome. A total of 12 software systems and around 15 hardware systems are required to get one store up and running. Some of the core technologies were the goods management system, the mobile app for store operators to manage the temperature and lighting, the payment software and the surveillance system.

We are working on some other functions, such as payment via facial recognition and a surveillance camera that can analyze human body language, such as how people move when they are suspiciously putting goods in their handbag.

What’s the difference between the Hisense automated store and its peers?

Our current version is a standardized 18-square-meter steel box, which is manufactured and assembled at a factory. When a client orders a store, we are able to launch it overnight. Some other retailers only make the components of the stores in advance and then assemble them at the store site, which usually takes a few days.

But Hisense doesn’t apply the coolest technologies to the current version of our store, such as facial recognition payment and radio frequency identification (RFID), which many retailers have already applied to their stores.

Why hasn’t Hisense applied such technology yet?

We wanted our store to be the most approachable and scalable one. As for facial recognition, there are still bugs if the number of users goes up, so we abandoned it in the current version.

What is RFID? A label is attached to every product so that the price of several goods can be calculated at one scan. In our Hisense store, in order to get the bill, customers need to scan the bar code of each product one after another.

The technology has been available in China for more than 20 years, but no supermarket uses it, only apparel retailers do. Why? Because the radio frequency is likely to be affected if there is liquid and metal in the products. Companies including Alibaba and BingoBox have applied the technology to their automated stores, which appears very cutting-edge, but it is not practical.

Hisense replaced BingoBox as the technology supplier of Auchan automated stores after the original ones suspended operations due to high temperatures. How can Hisense technology solve the heat problem?

The temperature issue was just one of the reasons behind Auchan’s decision to change the supplier. The glass we use to build the Hisense stores is the same material as the one used in China’s Zhongshan Station in Antarctica. What’s more, we embed our air conditioning systems in the stores.

Hisense has helped launch more than 300 Auchan automated stores in China. How are sales?

We are not able to get Auchan’s data. But according to the numbers it shares with us, the daily sales of each store have ranged from 500 yuan ($79) to 3,000 yuan as of the end of February. Auchan said it is not worried because the peak season for convenience stores, summer, hasn’t come yet. Sales in summer will triple, Auchan estimates.

Is Hisense going to expand the model to other countries and regions?

We are in talks with retailers in Taiwan, Russia and France. I think projects are going to be launched soon. In those areas, the stores are likely to accept credit cards, rather than mobile payment services such as Alipay and WeChat Pay used in China.