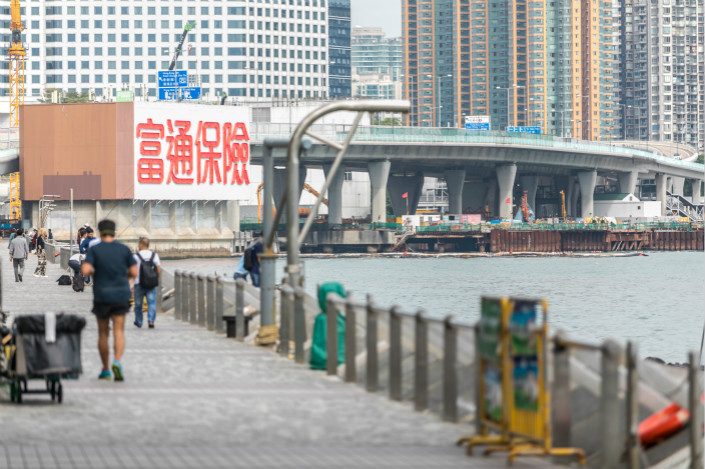 Financial firm Tongchuangjiuding Investment Management Group Co. Ltd. is considering selling its stake in FTLife because the Hong Kong regulator has questioned whether Jiuding is eligible to own 100% of the Hong Kong insurer. Photo: VCG

Embattled private financial firm Jiuding is planning to sell part of its stake in a Hong Kong insurance company due to pressure from the city’s regulator, Caixin has learned.

In May 2016, Jiuding acquired the entirety of FTLife for nearly HK$10.7 billion ($1.36 billion) from Ageas, a Brussels-based insurance firm created to succeed the collapsed Belgian-Dutch group Fortis.

Jiuding, which is under investigation on the Chinese mainland for suspected violations of securities laws, is considering selling the stake because the industry watchdog in Hong Kong has questioned whether the company is eligible to own 100% of the insurer, the sources said.

Getting into the insurance business in Hong Kong requires the authorization of the city’s Insurance Authority. The authority reserves the right to withhold authorization if it deems that the organization or individual who is a director or controller of the company is not a “fit and proper person,” according to the Insurance Ordinance of the special administrative region.

The watchdog may issue a notice of objection if it finds that an insurance company’s existing controller is unfit. That in turn can lead to the application of various restrictions on the firm’s shares, including barring the transfer of a stake, according to the rules.

One of the ways an organization can fail to be deemed “fit and proper” is if it “has been the subject of an investigation conducted by any regulatory authority in Hong Kong or elsewhere,” according to the rules.

Jiuding announced in late March that it was under investigation by the China Securities Regulatory Commission for possibly violating securities laws. The news sent the company’s shares — listed on China’s largest over-the-counter stock trading platform — plummeting 75% in two days.

Caixin has learned that the probe could be targeting alleged misconduct such as engaging in market manipulation and illicit practices in previous share placement deals, and raising funds from public investors.

The investigation into Jiuding is likely part of a government crackdown on misconduct by private financial conglomerates, as authorities seek to rein in risks from credit-fueled overseas expansions by some companies. At the same time, it aims to tighten control over the ownership of financial institutions to stop shareholders from building up hidden stakes and using them to influence operations.

In one of the most high-profile cases, China’s insurance regulator announced in February that it was taking over troubled Anbang Insurance Group for one year, and possibly up to two years, to restructure and recapitalize the company after it violated laws and regulations that threatened its solvency. In March, its former chairman, Wu Xiaohui, admitted in court to illegally raising more than 720 billion yuan ($113.6 billion) by selling insurance products without government approval. In April, the regulator announced that a state-run bailout fund was injecting 60.8 billion yuan into the company.