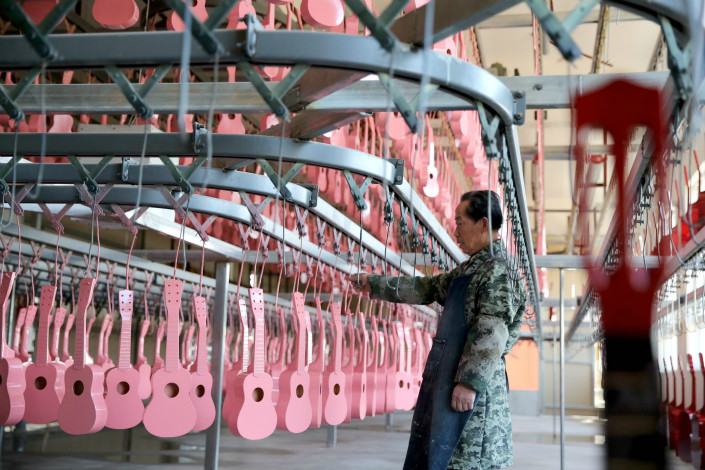 A worker inspects guitars at a factory in Shuyang county, Jiangsu province, on April 7. Photo: VCG

Manufacturing activity in China expanded at a slightly quicker pace in April as production improved in spite of a contraction in exports due to ongoing Sino-U.S. trade tensions, a Caixin survey showed Wednesday.

The Caixin China General Manufacturing Purchasing Managers’ Index (PMI), a composite indicator that gives a snapshot of operating conditions in the country’s manufacturing sector, rose to 51.1 in April, up from a four-month low of 51 the previous month.

The Caixin PMI is closely watched by investors as one of the first available monthly indicators following the trends of the world’s second-largest economy. A number above 50 indicates an expansion in activity, while a figure below that points to a contraction.

The April subindexes were a mixed bag. Output expanded at a slightly faster pace, but growth in new orders slowed to a seven-month low. Employment shrank at a slower pace, and delivery times lengthened.

Manufacturers’ confidence in the year ahead dipped to a four-month low, the Caixin survey showed. “Companies were relatively cautious with regards to inventories, with stocks of finished items and purchased inputs both rising only slightly,” the index’s compilers said.

Trade tensions between China and the U.S. have escalated in recent weeks, with both sides exchanging tit-for-tat tariff measures and threats. In a bid to avoid an all-out trade war, U.S. Treasury Secretary Steven Mnuchin is scheduled to visit Beijing for trade negotiations in early May.

Due to the trade spat between the world’s two largest economies, China’s official manufacturing PMI, released by the National Bureau of Statistics (NBS) on Monday, slightly slipped to 51.4 in April from March’s 51.5.

The Caixin PMI, sponsored by Caixin and compiled by international data analytics provider IHS Markit Ltd., focuses on light industry, while the official PMI focuses on heavy industry. The geographic distributions of the companies covered in the two polls are different.