By Liu Caiping and Liu Xiao 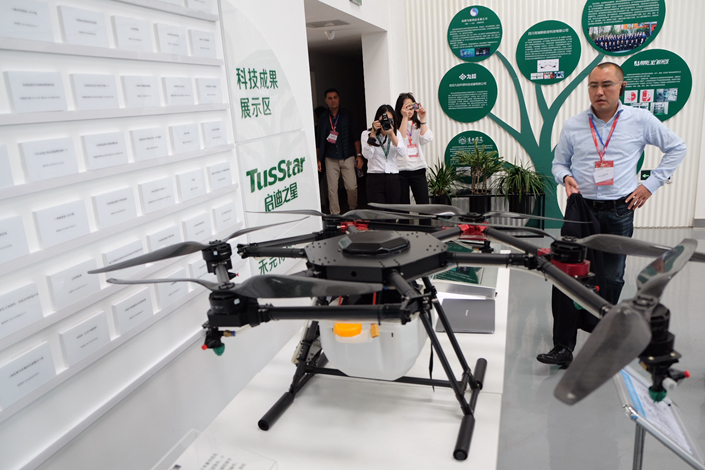 * While regulators are encouraging new-economy companies to list, Caixin has learned the opportunity is open only to a small, elite group of companies

* The new China depositary receipts will have only a limited impact on the domestic market, according to calculations by China Securities

(Beijing) — For domestic listings, it’s out with the old, in with the new.

For years, China has sought to transition its economy away from old-line manufacturing to services and technology-intensive sectors. Its two-pronged strategy for IPO reform serves this goal by making it easier for companies from the high-tech and strategic emerging sectors to raise funds on the domestic stock market, which has long suffered from a lengthy backlog of companies waiting for an IPO, many of which are in traditional industries.

In 2017, most of the more than 400 companies approved for IPOs were from traditional industries, and thus did not do much to improve the structure of the market, China Securities Regulatory Commission Chairman Liu Shiyu said during an internal meeting, sources close to the regulator told Caixin.

At the same time, the CSRC has gotten tougher on IPO applicants that are waiting to be listed. After the Lunar New Year holiday in mid-February, local securities regulators were told to raise the bar for accepting IPO applications to reduce the number of companies in line to list, sources told Caixin. The number of firms currently waiting has been reduced to 320, according to CSRC’s most recent disclosures, from a record high of 895 in June 2016.

As of April 12, 113 companies had withdrawn their IPO applications, more than in all of 2017. In March alone, 79 companies retracted application, the most ever in a single month.

In December, the CSRC met privately with 15 securities firms to discuss speeding up the IPO approval process and encouraging some companies that do not meet requirements to withdraw their applications.

The CSRC also asked intermediaries to re-examine the companies they sponsor to weed out the noncompliant ones, adding that sponsoring intermediaries will face repercussions if the CSRC identified problems in their own spot checks.

Starting from the second half of 2016, the CSRC has conducted onsite inspections of more than 70 companies. As a result of the inspections, four IPO hopefuls were suspected of violating rules and regulations and handed over to the inspection department, while five others were issued warnings.

“The CSRC is continuing to speed up the approval process. In the future, IPO approval for domestically listed firms will be in step with international standards and require only three to six months,” a source close to regulators told Caixin.

While the CSRC is encouraging some companies to withdraw their applications, others are winning approval in record time.

Foxconn Industrial Internet, a unit of the world’s largest contract electronics manufacturer, which assembles Apple’s iPhones, set a record when its IPO was approved in 36 days.

Several people close to the China Securities Regulatory Commission told Caixin that Foxconn’s IPO was shepherded through a special expedited path after the company filed on Feb. 1.

Leading Chinese biotech firm WuXi AppTec, spun off from a company that delisted from the New York Stock Exchange in 2015, won approval to go public in 50 days. China’s largest electric-car battery-maker, Contemporary Amperex Technology Co. (CATL), won regulatory approval to list on the ChiNext board in Shenzhen in five months, much faster than usual.

China’s securities regulator said in February this year it plans to make it easier for companies in emerging industries to list on the domestic market.

The CSRC promised to “reform the listing mechanism, increase the mechanism’s tolerance and adaptability, and give more support to new technology, new industry, new forms of industry and new business models,” according to an official statement.

Cream of the crop

While regulators are encouraging new-economy companies to list, Caixin has learned the opportunity is open only to a small, elite group of companies.

For established companies, there are other options. On March 30, the State Council issued a draft document that unveiled a trial program for CDRs. Modeled after U.S.-listed American depositary receipts, the program will allow overseas-listed Chinese companies to transfer a portion of their shares to banks so they can be traded on the domestic stock market.

By trading via the new CDRs, innovative companies will be able to speed around barriers such as weighted voting rights and requirements on profitability that discourage IPOs on the A-share market.

Under the pilot program, eligible companies must have a market value of at least 200 billion yuan ($31.5 billion), according to the statement. Only a handful of companies, including Baidu Inc., Alibaba Group Holding Ltd., Tencent Holdings Ltd., JD.com Inc., Netease Inc., China Mobile Communications Corp. and China Telecom Corp. Ltd., meet the requirement.

CDRs will have limited impact on the domestic market, according to calculations by China Securities, which estimates the program may bring about 200 billion yuan in new funding, compared with more 500 billion yuan that has been raised on the A-share market so far this year.

Given that China’s A-share market is worth about 50 trillion yuan, the effect of CDRs will be like a drop in an ocean, a source close to regulators told Caixin.

Innovative companies that have not been listed on the mainland, including overseas-incorporated Chinese companies listed in Hong Kong called “red chips,” can list even if they do not meet previous profitability requirements.

According to the new rules, companies worth at least 20 billion yuan that have generated at least 3 billion in revenue in the preceding fiscal year are eligible to take part in the pilot program.

The regulator said it will also consider some growth companies with leading technology and a competitive edge over their peers.

“The pilot program is only targeted at a small portion of innovative enterprises, so the enterprises will be relatively easy to select,” a source close to regulators told Caixin when asked whether such regulatory discretion could lead the perception that the regulator is playing favorites.

The program aims to de-emphasize profitability and give more weight to other factors such as the valuation, growth potential and social impact.

Caixin has learned that potential candidates will be assessed by a review panel whose members will include experts in technology and innovation, such as academics, entrepreneurs and senior investment bankers. They will assess a company’s eligibility based on factors that include its business model, corporate strategy, product innovation, competitiveness and investment in research and development.

Not every company with a large valuation is guaranteed to be profitable, an industry insider told Caixin. Several rounds of financing for companies in popular industries such as bike sharing has resulted in a high valuation, but that valuation does not mean a stable profitability model, the source said.

On the whole, the ideas are good, but they need to be thought through “so they don’t end up unintentionally making a mess,” a market insider told Caixin.