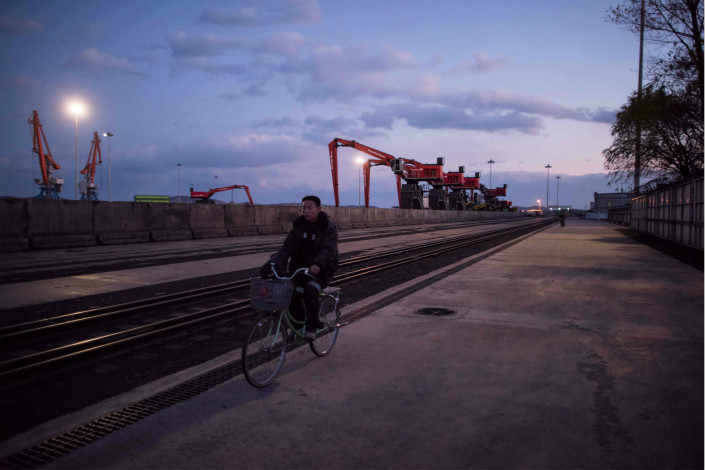 A man cycles past a railway in the Rason Special Economic Zone in North Korea on Nov. 21.. Photo: VCG

South Korea’s isolated northern neighbor has in recent months surprised observers with unprecedented displays of diplomacy, including agreeing to a historic inter-Korean summit in April, and a planned meeting between Kim and U.S. President Donald Trump in May.

Although many outside of the country believe that North Korea’s recent diplomatic overtures were the result of international sanctions, the dictatorship’s economy has actually been growing since Kim came to power in late 2013, Joung Eun-lee, a research fellow at the Korea Institute for National Unification, told Caixin.

On April 20, Kim announced that his country would indefinitely pause nuclear tests and test-launches of intercontinental ballistic missiles, and instead shift its focus to economic development.

But the North Korean economy has long been transforming, moving away from the famine-plagued 1990s and gradually incorporating market reforms, Joung told Caixin.

The Korea Institute for National Unification was founded by the South Korean government in 1990 to study North Korea and issues related to Korean reunification. Joung’s research frequently takes her to the regions bordering North Korea, where she interviews business owners with long-term contact with the country. Joung has also interviewed North Korean defectors, including those who remain in contact with the families they left behind.

In the past, the North Korean economy was strictly planned, and the markets where farmers met to sell agricultural products were the only ones condoned by the government, Joung said. But in recent years, black market trading in other goods, including food and clothing, has received government recognition, Joung said — a change that extends beyond the capital, Pyongyang.

Kim Jong Un’s father and predecessor, Kim Jong Il, had an inconsistent attitude toward black market trading, sometimes accepting its existence but attempting to contain it at other times, Joung said. But “as far as I know, (Kim Jong Un) has never cracked down on the food and clothing markets,” Joung told Caixin.

Additionally, the rise of black market real estate transactions is an important indicator of North Korea’s changing economic outlook, she said. After decades of government failure to meet housing needs, “North Koreans today have begun to purchase privately renovated and privately built real estate, rather than just waiting for the government to allocate them a home,” Joung said, adding that although trading in real estate has not received official approval, its growth rate has been considerable.

Joung is optimistic that, in the aftermath of Kim’s recent meeting with South Korean president Moon Jae-in, “North Korea’s economic reforms and opening up to the outside world could happen very quickly.”

The “biggest obstacle to North Korea’s current economic development is the backwardness of its infrastructure,” Joung said. And updating this infrastructure will require investment from other countries.

But Joung said North Korea’s involvement in projects like the Kaesong Industrial Park was mainly through providing cheap labor, meaning the country’s own industrial chains did not benefit from the investment. In the future, North Korea will probably have to change the way it cooperates with foreign investors, shifting its focus to infrastructure, mining and even emerging industries such as information technology, Joung said.