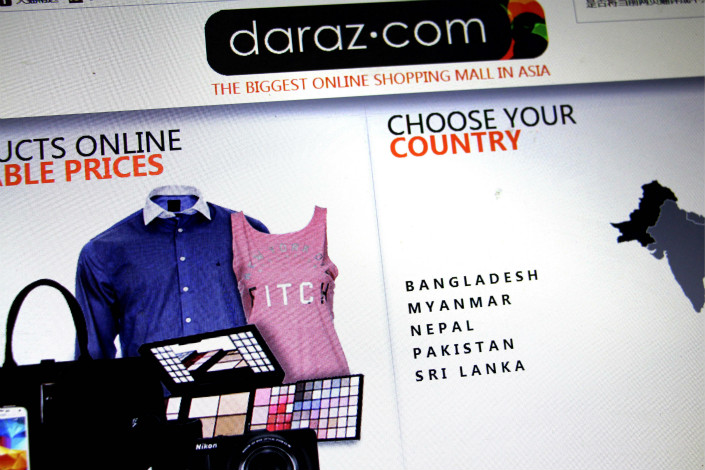 E-commerce giant Alibaba Group Holding Ltd. has moved into Pakistan with its purchase of a leading local online seller, extending its South Asia footprint as it expands into other developing markets.

No financial terms were given for Alibaba’s purchase of Daraz Group, which was announced by the Pakistani’s parent Rocket Internet on Tuesday. In the deal, Alibaba will acquire Daraz’s entire share capital.

The Pakistani company operates a leading e-commerce site in its home country, as well as other sites in the South Asian nations of Sri Lanka, Nepal and Bangladesh, as well as adjacent Myanmar. Daraz will continue to operate under the same name after the acquisition, Rocket said.

“The sale of Daraz to Alibaba is another testament to Rocket Internet’s ability to successfully scale and exit market-leading companies,” said Rocket CEO Oliver Samwer. “Leading technology and a strong logistics network have helped creating one of the fastest growing companies in the region. The acquisition by Alibaba is a tremendous success for the entire team working at Daraz.”

The deal is the latest in a growing string of similar South Asian tie-ups for Alibaba and its close affiliate Ant Financial Services Group.

Two weeks ago Ant purchased a minority stake in bKash, Bangladesh’s largest mobile fund-transfer provider. In that deal, Ant bought 10% of bKash for an undisclosed amount, with an option to buy another 10% later. In March, Ant also agreed to buy 45% of Telenor Microfinance Bank, Pakistan’s largest mobile financial service provider.

In India, the region’s largest market, Alibaba, Ant and longtime investment partner Softbank Group Corp. also hold a majority stake in Paytm, one of the country’s leading electronic payments firms. That alliance saw Alibaba and Softbank last month announce a new $450 million investment in Paytm’s online shopping mall, with Softbank providing most of the figure, according to a local media report.

Alibaba has focused most of its overseas acquisitions on South Asia and also the Southeast Asia market, which share many similar characteristics with its home market. Its main Southeast Asian asset is Lazada, which has received $4 billion in Alibaba investments over the last two years, including a $2 billion investment in March.