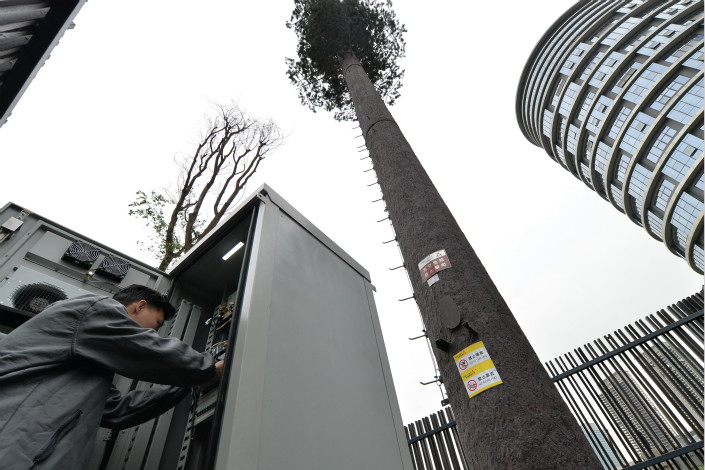 An employee of China Tower Corp. Ltd. inspects one of the company’s telecommunication towers in April 2017. Photo: VCG

* Planned IPO in 2017 delayed due to regulatory hurdles, need for approval from company’s three stakeholders

China Tower is expected to raise as much as $10 billion by seeking a valuation of up to $40 billion, according to sources with knowledge of the plans.

The application comes on the heels of the application of Chinese smartphone-maker Xiaomi Corp., which on May 3 also filed for an initial public offering (IPO) on the Hong Kong Stock Exchange.

While Xiaomi is expected to sell its shares in July, China Tower is aiming to float its shares soon after the summer lull, sources said.

This came under a plan crafted by the telecommunications regulator, the Ministry of Industry and Information Technology. Such a move is consistent with arrangements seen in Western markets like the U.S., where independent companies often own and operate towers that are leased by wireless carriers for use in their coverage networks.

In 2015, the network operators agreed to sell and transfer assets worth a combined 214 billion yuan ($33.8 billion) to China Tower. China Mobile contributed 116.4 billion yuan in assets for a 38% stake, while Unicom and China Telecom hold stakes of 28.1% and 27.9% respectively. State asset-management firm China Reform Holding owns the remaining 6%.

According to its prospectus, China Tower operated 1.9 million tower sites and had 2.7 million tenants at the end of last year. Its profit surged more than 25 times to 1.9 billion yuan in 2017, while operating revenue rose nearly 23% to 68.7 billion yuan.

China Tower selected a group of investment banks, including China International Capital Corp. and Goldman Sachs, in mid-2017 to be the sponsors for an IPO. But the offering was delayed till this year as China Tower had difficulties obtaining all the requisite approvals from state regulators as well as its three stakeholders.