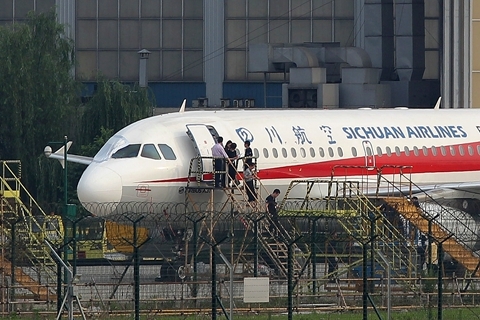 Workers inspect a Sichuan Airlines aircraft that made an emergency landing in Chengdu after a cockpit windshield broke off. Photo: VCG

China’s aviation authority said the windshield that shattered during a Sichuan Airlines flight Monday, forcing an emergency landing, was the original equipment installed by Airbus and didn’t have any repair history before the failure.

The cockpit windshield on an Airbus A319 blew out Monday at 32,000 feet, causing a co-pilot to be partly sucked out of the plane. The flight eventually landed safely. The co-pilot and another crew member suffered minor injuries.

The Civil Aviation Administration of China (CAAC) said the Airbus jetliner had been in service for less than seven years. According to the CAAC, the Sichuan Airlines plane hasn’t changed or repaired any of its original parts, which means a manufacturer fault couldn’t be ruled out.

The aviation regulator said it notified France’s Bureau of Enquiry and Analysis for Civil Aviation Safety, known as the BEA. The French accident investigation agency and Airbus said they will send staff to China to aid in the investigation.

The accident probe will focus on the design, manufacture and construction era of the plane, said Tang Weibin, director-general of the CAAC's Office of Aviation Safety, at a news conference Tuesday.

A week ago, an Airbus plane operated by the U.S. budget airline JetBlue was forced to make an emergency landing in Florida when an outer windshield shattered in midflight. That airplane and Sichuan Airlines’ A319 both belong to Airbus’s top-selling A320 family of narrow-body, twin-engine commercial passenger jetliners.

Chen Jianguo, a senior airline pilot and commentator, told Caixin that it’s not unusual for an airplane’s windshield to crack during a flight. But incidents like the one involving the Sichuan Airlines plane — in which the windshield completely shattered — are rare, Chen said.

Chen said a windshield could crack for many reasons, such as striking birds, too much difference in air pressure between the cabin and the exterior, or aging glass.

In a 1990 incident, an improperly installed windshield on British Airways Flight 5390 broke from its frame, causing the captain to be blown partly out of the aircraft. Investigators found that when the windshield was installed 27 hours before the flight, maintenance technicians used the wrong bolts.

In the past month, U.S. domestic carrier Southwest Airlines had two incidents involving damaged windows. On April 17, a Southwest Airlines passenger was killed after an engine explosion caused a cabin window to shatter in midflight. That was the first passenger’s death in a U.S. commercial airline accident in more than nine years.

Another Southwest flight was forced to make an emergency landing in early May because of a cracked window. Southwest exclusively flies Boeing 737 twinjets.