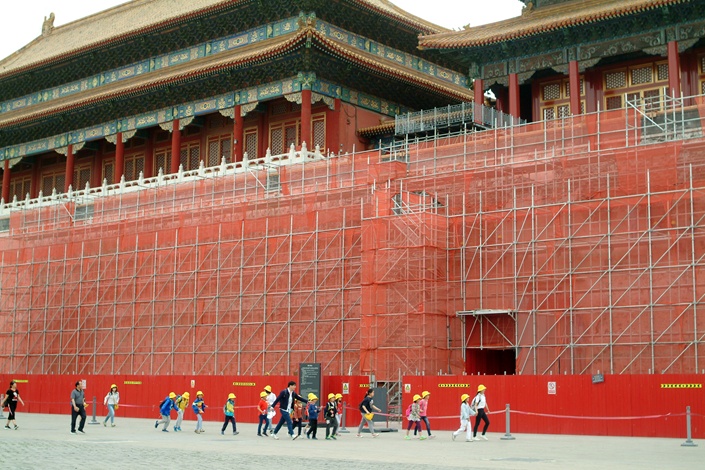 Students attending a traditional-culture program walk past a wall that is being renovated in Beijing’s Forbidden City on May 5. Photo: Wu Gang/Caixin

A tech CEO’s online complaint about his daughter’s struggle to enroll in a Beijing school went viral on Tuesday, provoking renewed scrutiny of the elaborate barriers that Chinese cities put up against new arrivals.

Zhang Xiaolong, who heads Beijing-based software firm Fenbi Lantian Technology Ltd., said in a strongly worded Weibo post — since deleted — that his daughter faces rejection by a private school in the capital if she does not officially register as a Beijing-based student by the end of the month.

Zhang said he found it strange that a private school would require this, and that it was pointless to go through the complicated student registration process because without an official Beijing “hukou” (household registration) document, his daughter would still be ineligible to take the national university entrance exam in Beijing in her final year of high school.

Before Zhang’s post was deleted, it had been reposted tens of thousands of times, and attracted the attention of multiple Chinese media outlets.

Hukou are registration papers that connect each Chinese citizen’s residency rights (including homebuying) and access to public services to the place where they are registered, typically their place of birth. Because of China’s uneven economic development in recent years, a citizen with a hukou from a wealthier city, typically on the country’s eastern coast, effectively has access to better schools and receives subsidies at better-equipped hospitals than their counterparts in rural areas and smaller cities.

Mass migration of both unskilled laborers and university graduates like Zhang into China’s largest cities has thrown into sharper focus the divide between those who hold more “desirable” hukou and those who don’t, especially since the process of converting a hukou is costly and complex. Many migrant parents find themselves with a choice of either leaving their children at home, or bringing them to live in cities where they struggle to get access to public schools and universities.

Zhang clarified in a later post (link in Chinese) that he had in fact tried to obtain a Beijing student registration for his daughter, but had found himself in bureaucratic limbo after a wild goose chase through multiple city districts.

Zhang’s own temporary Beijing residence permit was registered using a friend’s address in Haidian, a western district in the capital that’s home to many universities and prestigious schools. To prevent parents who are seeking their children’s entry to good schools from driving up real estate prices, Haidian allows only one student to be registered for each apartment unit in the district. As a result, the friend’s child would be unable to register if Zhang were to register his own daughter first. The tech executive said other districts had refused to register a nonresident student, and that he had also been unable to change the address on his temporary permit.

“I’ve worked in Beijing for four years, and paid 4 million (yuan) in personal income taxes,” Zhang complained in his original post, citing a figure equivalent to about $628,000. “Add to that all kinds of business taxes, it all comes up to at least 80 million, if not 100 million. If I can’t enjoy any social welfare, fine, but why is even a private school out of bounds for my child?”

Zhang threatened to move both his family and his company out of Beijing if his daughter fails to secure a spot at a school in the capital, “to a place that can accept me and my colleagues who have no Beijing hukou.”

Chinese policymakers have promised and introduced reforms to the complicated hukou system in order to keep up with demographic changes. But China’s cities still struggle to balance population control policies with millions of migrants hoping for their own share of urban prosperity.

While Zhang’s family is wealthier than most, its predicament struck a chord with some Weibo users, who say China’s capital should be more flexible in order to attract businesses and talented individuals. “Would be great to move the company to more open-minded places like Shanghai and Shenzhen,” user Aiyayayashiniya said in a comment on Zhang’s Weibo page. “Frankly, Beijing is not a suitable place for entrepreneurship.”

Others criticized Zhang for his rude language directed at the city, and for thinking his child should receive special treatment simply because he could afford to send her to a private school. Zhang later apologized “if any people from Beijing” had been offended by his original post.