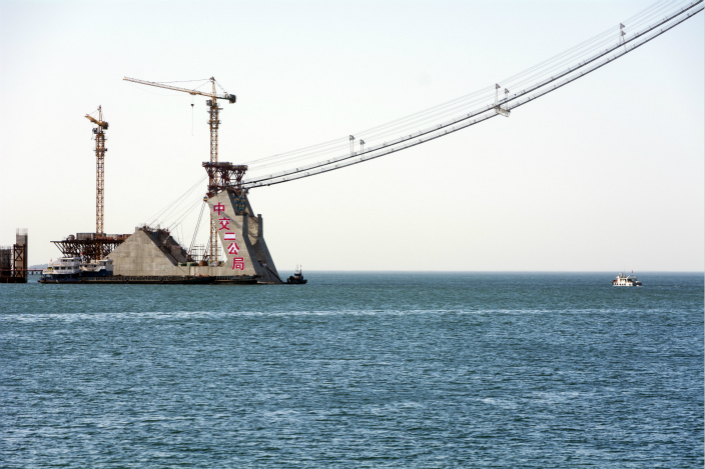 A bridge is built in Dalian, Liaoning province by a China Communications Construction Co. subsidiary in 2014. Photo: IC

*The Canadian government’s decision comes as the U.S. and European countries are signaling they will scrutinize Chinese acquisitions more closely

*Canada’s veto of this deal is slightly unusual, as infrastructure has not usually been considered a sensitive area in terms of national security

(Beijing) — Canada has vetoed the sale of Aecon Group Inc., the country’s largest publicly-listed infrastructure builder, to a Chinese buyer, amid a growing wave of closer scrutiny for such deals by Western countries concerned about national security.

The deal is one of the first to be blocked by Canada, following a series of similar vetoes from the U.S. and growing signs that European countries will also give greater scrutiny to such purchases. It is also one of the first major deals to be vetoed in the infrastructure-building space, unlike previous vetoes that were mostly for purchases in the high-tech and financial sectors.

Aecon, a builder of bridges, mining facilities, skyscrapers and airports, had announced in October the original plan to be acquired by the state-owned China Communications Construction Co. (CCCC), in a deal that valued the firm at Can$1.51 billion ($1.17 billion). Its Toronto-listed shares last traded on Wednesday at Can$17.34, well below CCCC’s offer price of Can$20.37, reflecting growing uncertainty after reports in February said the deal was being delayed due to a prolonged security review.

“While we are disappointed with the government’s decision, Aecon is and will continue to be a leading player in the Canadian construction and infrastructure market,” said Aecon CEO John M. Beck. “Through our proposed transaction with (CCCC) we had outlined a vision in which Aecon would be better able to compete with the many large global construction companies actively working in Canada. … While we have been prevented from pursuing the transaction, we are moving forward from a position of strength.”

The veto comes as the U.S. administration of President Donald Trump has blocked a growing number of similar purchases by Chinese buyers in the financial services and high-tech sectors. One of the most recent in the former category saw Ant Financial Services Group being forced to drop its $1.2 billion bid for MoneyGram International at the start of this year. One from the latter group saw a Chinese buyer forced to drop its $1.3 billion bid for chipmaker Lattice Semiconductor in the fall.

Last year Germany also become the first EU country to tighten its rules governing foreign takeovers of domestic companies, allowing the government to block deals that could result in the loss of critical technology.

The latest move by Canada was slightly unusual because it came in the infrastructure sector, which traditionally has not been considered as sensitive as high-tech and financial services, said Christopher Balding, a professor at the HSBC Business School at Peking University Shenzhen.

“This would typically fall outside of what I would think would be things that are historically considered national security,” he said. “MoneyGram, we could at least make a plausible case that there are security issues involved there. Semiconductors, same thing, we could make a plausible argument. Just straight infrastructure, it’s difficult to see how that is a national-security-type of issue.”

He added that Beijing isn’t helping to ease Western concerns about potential government ties between many of the buyers coming from a country where many of the biggest firms are state-owned, and even private businesses have strong government connections. Such concerns have led the U.S. to ban the import of telecommunications networking equipment from global giants Huawei Technologies Co. Ltd. and ZTE Corp., which are both private but some suspect may have ties to Beijing.