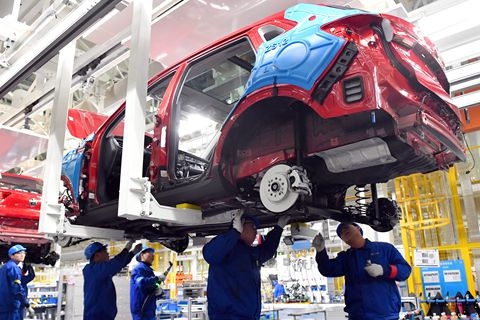 China is drafting new rules on investment in its car industry as a first step toward abolishing foreign ownership restrictions on manufacturers in China. The rules will require new auto plants to produce more electric vehicles and will bar new non-electric projects.

The National Development and Reform Commission (NDRC), China’s top economic planner, recently circulated the policy proposal to local governments and industry participants for feedback, stating that the current car industry development policy in place since 2004 would be abolished once the new one is implemented.

A person close to policy makers told Caixin that the new rules are expected to be released by the end of June and are likely to be implemented by year end.

In April, the NDRC announced a timetable for opening up the car industry, promising to remove the 50% foreign ownership cap on electric vehicle-making ventures by the end of this year. The ceiling for all commercial vehicle ventures will end in 2020 and for all passenger vehicle ventures, 2022.

Under the new policy, building new factories to produce fossil-fuel burning autos will be prohibited. That means that current foreign partners can only adjust their ownership of existing joint ventures rather than building new plants in China.

The new policy would allow new projects to produce electric vehicles, meaning that foreign companies like Tesla will be able to open electric vehicle-making plants in China without the need to line up a local partner.

Tesla has received tentative approval from the Shanghai government to manufacture cars in the city, Caixin has learned. The U.S. carmaker has been negotiating with Shanghai since last year.

The new policy, while signaling the resumption of approval of new electric-car production facilities, will also raise the threshold for investing in the already crowded sector.

Last June, China suspended issuance of new permits to produce electric vehicles because of concern that additional approvals may lead to a glut in the world’s biggest auto market and controversy over the qualification of some of the 15 permitted manufacturers.

The new policy would also encourage state-owned automakers to bring in private companies through equity investment under the so-called “mixed-ownership reform,” aiming to “build world-class automakers that can then compete with multi-national corporations.”