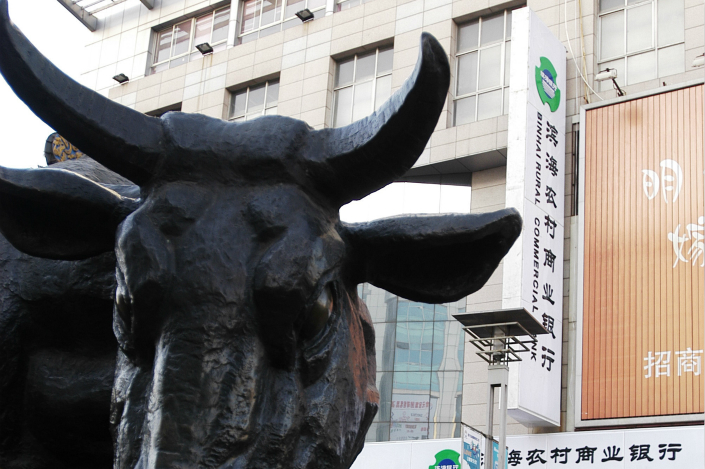 A discipline watchdog inspection was looking into problems at Tianjin's state-owned enterprises including improper staffing, corruption and lack of leadership. Photo: VCG

* The national corruption watchdog is looking into improper staffing, corruption and lack of discipline at state-owned enterprises in the city.

The chairman of a rural commercial bank in Tianjin has committed suicide after the national anti-graft commission began looking into the bank earlier this month, local police said.

Yin Baojin, 54, chairman and party secretary of Tianjin Binhai Rural Commercial Bank Corp., was found dead in his office in the northern port city on Saturday. Tianjin police said investigators have ruled out the possibility of homicide after a preliminary investigation, which found that Yin slit his wrist around 2 p.m. on Saturday.

Yin’s suicide came one month after the Central Commission for Discipline Inspection (CCDI) dispatched a team of investigators to the bank. The inspection was just the latest ongoing investigation of 22 state-owned enterprises (SOEs) in Tianjin, as the national anti-corruption probe shifts to include the finance industry.

The special inspection was looking into problems including improper staffing, corruption and lack of leadership and discipline at Tianjin’s SOEs, according to a CCDI statement (link in Chinese) released on May 2.

A source close to the rural bank told Caixin that Yin could not bear the pressure of the investigation once problems began to surface.

The bank did not issue a statement about Yin’s suicide.

Several finance industry insiders, however, speculated that Yin’s suicide might be related to the bank’s involvement in last year’s bond default scandal with Cosun Group.

In late 2017, Tianjin’s banking regulator fined the rural bank 160 million yuan ($25 million), according to a penalty document (link in Chinese). Tianjin Binhai was one of 13 institutions involved in Cosun Group’s 1.1 billion yuan bond default, in which the bank violated lending rules by helping China Guangfa Bank conceal some of Cosun’s bad assets with counterfeit loan-guarantee documents. The fine equaled nearly one-third of the 504 million yuan in profit that Tianjin Binhai earned in 2017.

In July, Yin was promoted from his previous position as the bank’s deputy party secretary and president. Before that, he spent nearly three decades at the Tianjin branch of the Agricultural Bank of China (ABC), China’s third largest lender by assets.

During Yin’s four-year tenure at Tianjin Binhai, the lender suffered from a host of problems, including a business suspension and an increase in its nonperforming loans. In 2014, the bank was involved in a scandal involving 4 billion yuan in off-balance sheet asset management products issued by Hengfeng Bank. Tianjin Binhai had illegally used bank funds to buy 2.7 billion yuan of the asset management products, which later went sour.

In early 2016, the rural bank was rocked by a 10 billion yuan loan default of Bohai Steel Group Co. Tianjin Binhai had been one of the three largest creditors of the local steel giant.

The bank might also have been involved in the recent liquidity crunch of HNA Group. The airline-to-finance conglomerate holds a 9.93% stake in Tianjin Binhai through its subsidiary Tianjin Airlines.