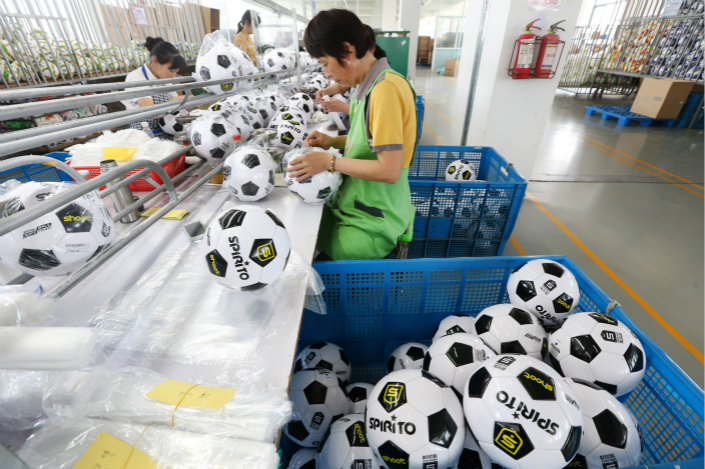 China’s manufacturing activity expanded at a stable pace in May, as companies continued to cut staff and raised prices in response to escalating costs, a Caixin survey showed Friday.

The Caixin China General Manufacturing Purchasing Managers’ Index (PMI), an indicator that gives a snapshot of operating conditions in the manufacturing sector, stood at 51.1 in May, unchanged from April.

As one of the first available monthly indicators following the trends of the world’s second-largest economy, the Caixin PMI is closely watched by investors. A number above 50 indicates an expansion in activity, while a figure below that signals a contraction.

Input prices across the manufacturing sector rose at the fastest rate in three months in May, according to the Caixin survey.

“Respondents widely attributed their higher costs to rising prices for raw materials such as chemicals, metals and oil,” said the index’s compiler. “As a result, prices charged for manufactured goods rose at a solid pace that was the fastest in 2018 so far.”

The faster growth of output charges was a good sign that manufacturers could boost their profits, said Zhong Zhengsheng, director of macroeconomic analysis with consultancy CEBM Group, a subsidiary of Caixin Insight Group.

Companies continued to reduce staff as part of efforts to cut costs and raise efficiency, according to the survey. The rate of job shedding picked up notably in May from the previous month.

However, manufacturers remained optimistic that output would increase over the next year amid forecasts of rising client demand and the launch of new products, the survey showed.

That said, uncertainties have remained for exports. The index for new export orders picked up in May, but it remained in contraction territory, showing that the export situation was still grim, Zhong said.

The situation stems from the increasingly fraught trade relationship between China and the U.S. Just days after the two sides agreed to a pause to a brewing trade war following talks in Washington, the White House announced a target date for its plan to impose additional tariffs on $50 billion of Chinese goods on Tuesday.

China’s official manufacturing PMI reached 51.9 in May, the highest since September. That figure, released by the National Bureau of Statistics (NBS) on Thursday, defied market expectations for a drop.

The Caixin PMI, sponsored by Caixin and compiled by international data analytics provider IHS Markit Ltd., focuses on light industry, while the official PMI focuses on heavy industry. The geographic distributions of the companies covered in the two surveys are different.

The Caixin China General Services Business Activity Index, which tracks the country’s growing services sector, is scheduled to be released on Tuesday.