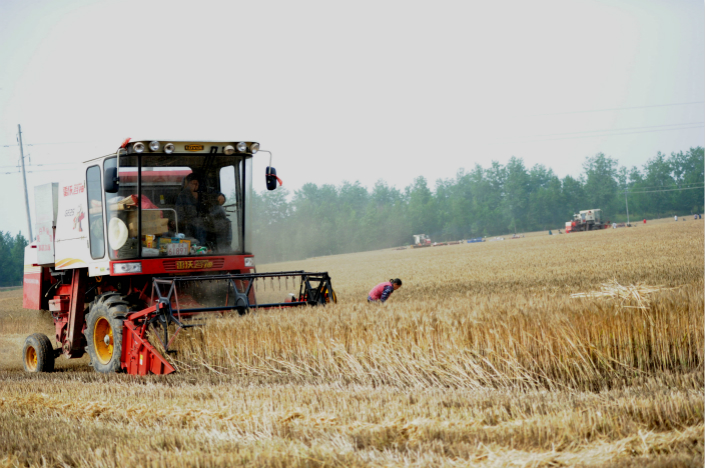 Wheat is harvested in Xinxiang, Henan province, in May 2013. Photo: VCG

A conservationist is challenging China’s agriculture authority to release information about the alleged contamination of wheat fields in the country’s breadbasket.

A district court in Beijing recently heard a case brought by Chen Yanyan, a manager with the environmental group Airman, seeking results of an official investigation into cadmium pollution in Central China’s Henan province.

Chen is demanding that the Henan Department of Agriculture disclose its findings or divulge what other agencies might have relevant information, according to his lawyer, Zeng Xiangbin.

Chen is also seeking a court order asking that China’s national-level Ministry of Agriculture withdraw its support for Henan in the case, Zeng said, calling the issue crucial to public health.

In June 2017, after leading its own investigation into the matter, Airman found wheat samples in Henan that contained two to 18 times more cadmium than is allowed under national food-safety standards.

Wheat containing the toxic chemical has been sold in the market, the nongovernmental organization said — a claim the local government denies. Officials said they bought all the tainted wheat in question.

Exposure to cadmium can lead to a number of health problems, including cancer, kidney failure, bone deterioration, and damage to the respiratory system, according to the World Health Organization.

Henan grows about 6 million hectares (23,200 square miles) of wheat per year, roughly a quarter of China’s total production, according to official statistics.

The cadmium scare is the latest in a string of food-safety scandals linked to contaminated soil. Nearly one-fifth of China’s farmland nationwide was contaminated and unsuitable for growing food for human consumption, a government survey found.

In the Henan case, an official revealed last year that soil experts had run tests on samples collected from areas suspected of contamination.

Chen subsequently filed an application with the Henan agriculture department seeking results of those tests, in accordance with China’s 2008 Government Information Disclosure Regulation.

But the department said it did not have the information and refused to disclose which agency might.

The Ministry of Agriculture in Beijing also refused to issue an executive order for Henan to comply with the disclosure rules.

Beijing’s Chaoyang District People’s Court, which has been handling Chen’s case since January, has not yet announced a verdict, lawyer Zeng said.