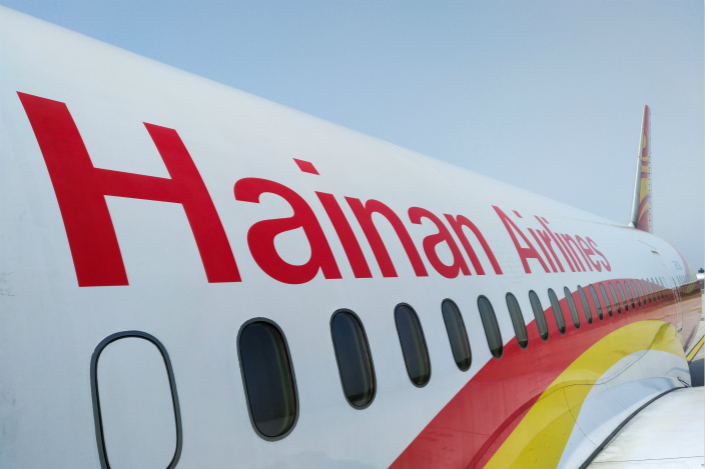 A Hainan Airlines plane is seen at Beijing Capital International Airport on May 13. Photo: VCG

Hainan Airlines Holding Co. Ltd., the air travel unit of HNA Group, plans to raise as much as 7 billion yuan ($1.1 billion) by issuing new shares to investors, as part of the indebted group’s ongoing restructuring.

The Shanghai-listed carrier is to issue no more than 20% of its current total shares and sell them to no more than 10 investors — including Temasek Fullerton Alpha Pte. Ltd., which is linked to a Singaporean sovereign wealth fund — to fund airplane maintenance and purchases, airport construction and aviation training, Hainan Airlines said in a Saturday filing (link in Chinese).

The Temasek fund, which plans to buy a 700 million yuan stake, will not be allowed to sell the shares for three years while other investors are limited to a 12-month no-transaction period.

After this deal, ultimate control of Hainan Airlines will shift to the Cihang Foundation from the Hainan branch of the State-Owned Assets Supervision and Administration Commission. The Hainan Cihang Charity Foundation is HNA’s largest shareholder, according to an emailed document released companywide and seen by Caixin in July 2017.

Trading of Hainan Airlines shares will remain suspended, as it has been since January, as the company goes through significant restructuring. Its shares last traded at 3.25 yuan.

Hainan Airlines originally planned to also buy stakes in two other HNA affiliates, Air Guilin Co. Ltd. and HNA Hotel Holdings Ltd., plus a controlling stake in an overseas hotel group, but due diligence on these assets hasn’t been completed yet.

Hainan Airlines is one of seven listed HNA units that have halted trading amid potential investment, asset divestment and restructuring. As one of China’s most acquisitive overseas buyers over the last five years, HNA Group has been under large debt pressure, reporting that its debt grew 22% to 737 billion yuan at the end of last year, and that its debt-to-asset ratio climbed to almost 60% by year-end.

Since the beginning of 2018 the group has offloaded assets worth some 105 billion yuan, according to Caixin calculations. A source close to HNA told Caixin that the total amount might reach 300 billion yuan by the end of the year.

The overseas assets from which it has recently divested include a 25.2% stake in Spanish hotel chain NH Hotel Group SA for 622 million euros ($732 million) and Amsterdam-based TIP Trailer Services, which offers truck trailers to logistics and transportation customers, for more than 1 billion euros.

In late May, the Shanghai-listed HNA Technology Co. Ltd. denied media reports that it is seeking to sell IT parts distributor Ingram Micro Inc., which it bought in 2016. But HNA Technology is undergoing restructuring as well, announcing in April that it would acquire online bookstore Dangdang Inc. in a deal that values the e-commerce company at 7.5 billion yuan.

Other HNA units undergoing restructuring include Shenzhen-listed Bohai Capital Holding Co. Ltd., which is increasing the stake it owns in a trust company by issuing new shares, and the Shenzhen-listed HNA Investment Group Co. which is selling its stake in a Shanghai investment unit for 2.9 billion yuan.