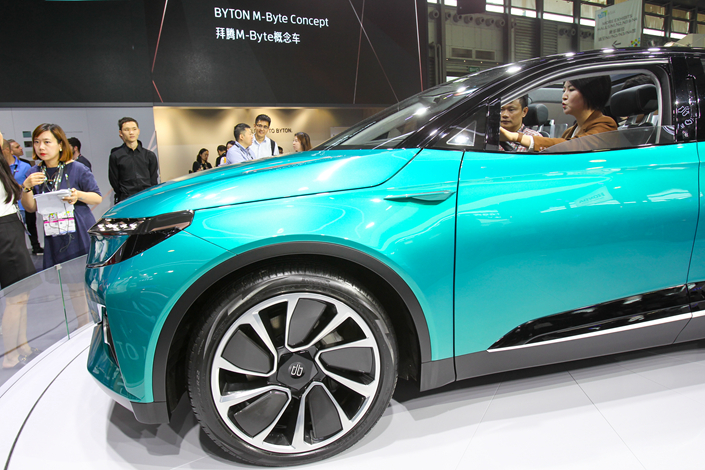 People sit in Byton’s concept car at an event in Shanghai on Wednesday. Photo VCG

Future Mobility Corp. (FMC), an electric-vehicle (EV) startup founded by BMW and Tesla alumni, has signed a deal for German engineering firm Duerr Group to build it an automated painting factory as it prepares to launch its first model.

The Duerr-built factory will be able to paint up to 150,000 cars a year for FMC’s Byton brand in Nanjing in what is one of the biggest orders from an electric-vehicle company to date, Duerr said in a release. The price of the deal was not disclosed.

Painting production is scheduled to start around October 2019, around the time that Byton aims to launch its first mass-produced model. This would be rapid progress for a company that officially opened its global headquarters in Nanjing in January 2017 and unveiled its first electric SUV prototype at an industry event over the winter.

China has raced ahead as the world’s largest electric vehicle market, with over 1.8 million vehicles, or around 40% of the global total, on the country’s streets by the end of 2017, according to the International Energy Agency. Beijing is pushing to have 5 million on the roads by 2020. FMC intends to have turned out its first batch of 150,000 Byton electric SUVs by that time.

While China’s electric vehicle market has raced ahead on the back of a generous subsidies program, the market is set to become more competitive as industry incentives are phased out as the central government clamps down on loopholes allowing automakers to abuse the system.

A new market-oriented quota system will be introduced that will require all automakers to ensure a certain percentage of their overall sales comes from low- or zero-emission vehicles, starting from 2019.

Byton is positioning itself as a cutting-edge challenger to the current Chinese market leaders such as the Warren Buffet-backed BYD Co. Ltd. and Beijing government-owned BAIC Group. It also faces competition from foreign brands such as Volkswagen and Honda, which are ramping up EV production to meet government rules. Elon Musk’s Tesla Inc. may also be preparing to enter the China market, having signed a letter of intent with the Shanghai government to manufacture cars in the city, Caixin reported last month.