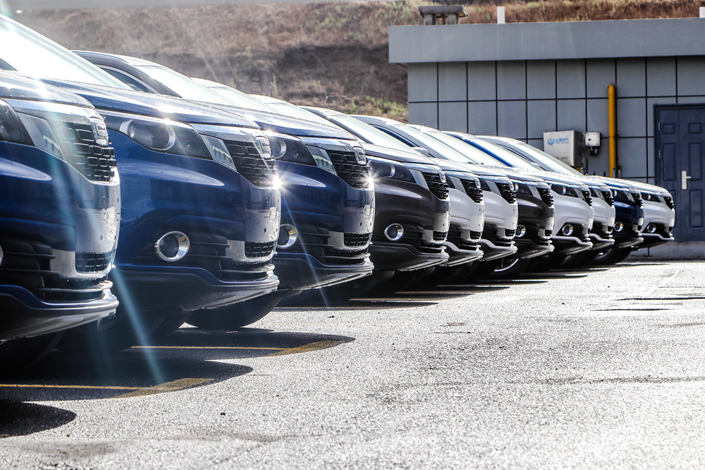 Used cars line up at a dealership in Changchun, Jilin province on May 28. Photo: IC

Used-car platform Uxin Ltd. has raised the upper limit of its fundraising target for a New York initial public offering (IPO) by nearly 10%, a sign of strong interest in the company, which has leveraged the scalability of the web to capitalize on China’s fast-growing auto market.

Uxin aims to raise up to $546.7 million by offering American depositary shares (ADSs) on the Nasdaq board, up from the $500 million it set in its initial listing prospectus in May.

Uxin said it plans to issue 38 million ADSs, with the option to issue another 5.7 million through an overallotment agreement at a price range of $10.50 to $12.50, according to an updated prospectus filed on Wednesday. The upper end of the price bracket would value the company at nearly $3.9 billion.

Founded in 2011, Uxin is among a growing group of Chinese online firms in emerging sectors that have received strong investor interest for their ability to scale up quickly.

The company, which counts internet search leader Baidu Inc. among its major shareholders, saw its revenue more than double in 2017 to 1.95 billion yuan ($304 million), though growth has slowed slightly this year. Over the first three months of 2018, Uxin’s revenue nearly doubled to 649 million yuan.

Uxin, however, is unprofitable. In the first quarter of this year, its sales and marketing spending exceeded its revenue, much like in the fiscal year of 2017.

The company boasts that it is the largest used-car trading platform in China, citing research from data and analytics firm iResearch. Uxin Used Car, which serves individual buyers, accounts for 41% of the individual market by gross merchandise value, the aggregate price of vehicles sold minus total service fees and interest, according to iResearch. Uxin Auction, which targets businesses instead of individuals, holds 42% of the business market.

China is the world’s largest car market, with nearly 29 million units sold last year to the nation’s rapidly growing middle class. The used-car market is smaller, but developing quickly, with 12 million vehicles changing hands last year, up 20% from 2016, according to data from the China Automobile Dealers Association. The used-car market is forecast to grow by a brisk 19% annually between 2017 and 2022, nearly double the rate of previous years, as the number of vehicles in the market increases and people become more comfortable with owning a car that used to belong to someone else. More accommodative government policies are expected to help. In March, Premier Li Keqiang announced that regulators planned to lift restrictions on cross-regional sales of used cars for all cities nationwide. The State Council, China’s cabinet, first laid out plans to remove such restrictions in 299 smaller cities in 2016, but did not include 15 major cities such as Beijing and Shanghai at the time.

Uxin is one of several used-car specialists fighting for a share of that market. Many have big tech names behind them, such as Souche, which is backed by e-commerce giant Alibaba Group Holding Ltd., as well as Renrenche, backed by social networking giant Tencent Holdings Ltd. Car auctions platform Chezhibao and Tiantianpaiche, which is also backed by Tencent, raised $125 million and $100 million respectively earlier this month. Chehaoduo, which claims its platform Guazi is China’s largest online used-car trader by volume, raised $820 million in series C fundraising in March from a consortium led by Tencent.

In January 2017, Uxin raised $500 million in a series D funding round from investors led by TPG Capital, Jeneration Capital and China Vision Capital.