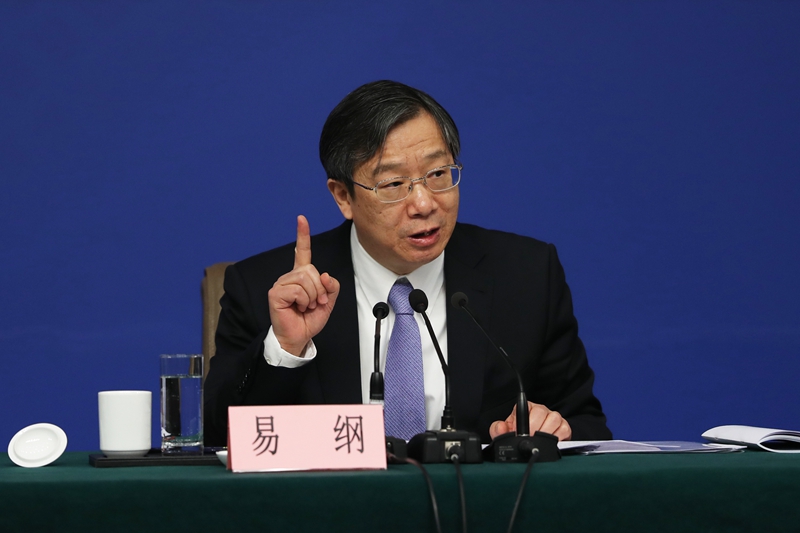 China’s central bank Governor Yi Gang called for investors to stay “calm and rational” after the domestic stock market tumbled to a two-year low in response to escalating trade frictions with the U.S.

Yi, governor of the People’s Bank of China, said Tuesday that China’s economy has growing resilience and capability to cope with external shocks and the central bank is prepared with policy tools. As Chinese stocks dropped Tuesday, the central bank injected liquidity into the market.

“China is in good position to cope with all kinds of trade frictions,” given its huge domestic market and strong growth momentum, Yi said in an interview with the Shanghai Securities News published on the central bank’s website.

In a surprise move, the PBOC Tuesday loaned 200 billion yuan ($31 billion) to financial institutions via its medium-term lending facility (MLF). Along with reverse repos, the central bank made a net injection of 250 billion yuan into the market, highlighting concerns over liquidity amid slower growth and trade tensions, analysts said.

Fears about the trade war between China and the U.S. have rocked global markets. Hong Kong’s Hang Seng Index tumbled 2.78% Tuesday for the fourth consecutive session. Benchmark indexes in Japan and South Korea also declined by more than 1.5%.

China's Shanghai Composite Index plunged 3.8% to 2,907.82 — the gauge’s worst drop since Feb. 9. The Shenzhen Component Index, which tracks many small and midsize technology companies, plummeted 5.3% on the day. More than 1,000 stocks, or one-third of those listed, dropped by the 10% daily limit on both the Shanghai and Shenzhen exchanges.

“There are ups and downs in the stock market; investors should be calm and rational,” Yi said.

The central banker said China’s economic fundamentals have remained sound and its resilience is improving. The country is undergoing accelerating economic transformation and the yuan is rising steadily.

“Based on the fundamentals, I am confident in the healthy development of the capital market,” he said.

According to the central banker, trade’s contribution to China’s growth has declined from 64% in 2006 to 33% in 2017, lower than the global average of 42%. Meanwhile, the country’s current account surplus has declined from 10% in 2007 to 1.3% in 2017, reflecting greater resilience to shocks from external markets, Yi said.

Risk aversion among investors is growing as financing costs and default risks are on the rise, analysts said.

Yi said the central bank is prepared with policy tools and will use a combination of monetary tools to maintain liquidity at an appropriate level and keep the deleveraging process at proper scale and pace. Policy makers intend to promote stable economic growth while preventing systemic financial risks, he said.

The central bank said Monday that it has set up a team to track domestic and international financial risks and help stabilize market expectations.