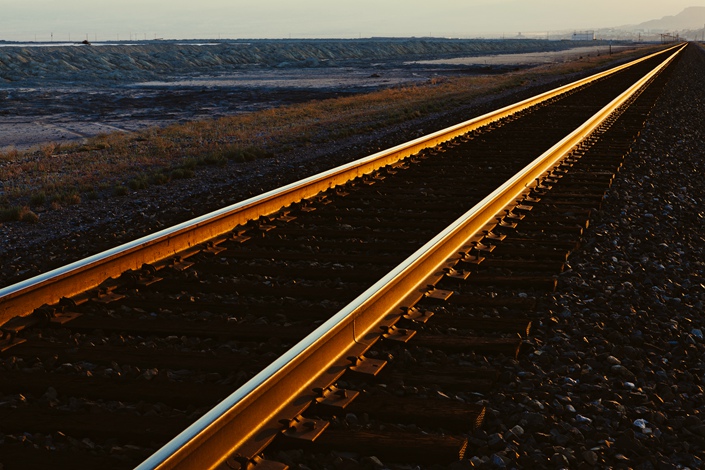 China and Nepal have signed a memorandum of understanding for the development of a cross-border railway. Photo: VCG

China’s Ministry of Transport announced it has signed a memorandum of understanding with its Nepalese counterpart for the development of a cross-border railway and the improvement of road links between Nepal and the Tibet autonomous region.

The transportation deals are part of a package of bilateral agreements covering politics, infrastructure, energy and technology, signed during Nepalese Prime Minister Khadga Prasad Sharma Oli’s meeting with Premier Li Keqiang at Beijing’s Great Hall of the People on Thursday, according to a separate statement (link in Chinese) published on an official Chinese government website.

Oli was in China for a six-day visit that also included a stop in Lhasa, Tibet’s capital.

The Nepalese delegation argued for the opening of nine more border points to improve connectivity between the countries, up from the four entry points that have been agreed upon, according to the Kathmandu Post. It is unclear whether a deal on the issue was reached.

Oli came to power in February as the head of a left-wing alliance with a mandate to improve economic ties with China after Nepal’s first general election since 1999. The government is wary of the Himalayan country’s reliance on India, which Nepal accused of carrying out an “unofficial blockade” in support of protests among the country’s Madhesi minority in 2015. The Indian government denied the charges.

Nepal offers ample room for expansion for China’s companies experienced in infrastructure development, especially as it continues to rebuild from the devastating 2015 earthquake that killed 9,000 people. Nepalese media also reported that the Nepal Electricity Authority and the State Grid Corp. of China signed an agreement to conduct feasibility studies for an 800-kilometer cross-border power transmission line, of which 90% would be in Tibet, according to Nepalese media.

However, the fate of several Chinese-backed hydropower projects remains uncertain, with China’s state-owned Gezhouba Group looking to push forward with plans for the $2.5 billion Budhi Gandaki project, and the Three Gorges Project Corp. looking to move ahead with the $1.8 billion West Seti dam project. Oli said revitalizing these projects is a priority for his government, according to the Global Times, a Chinese state media tabloid.