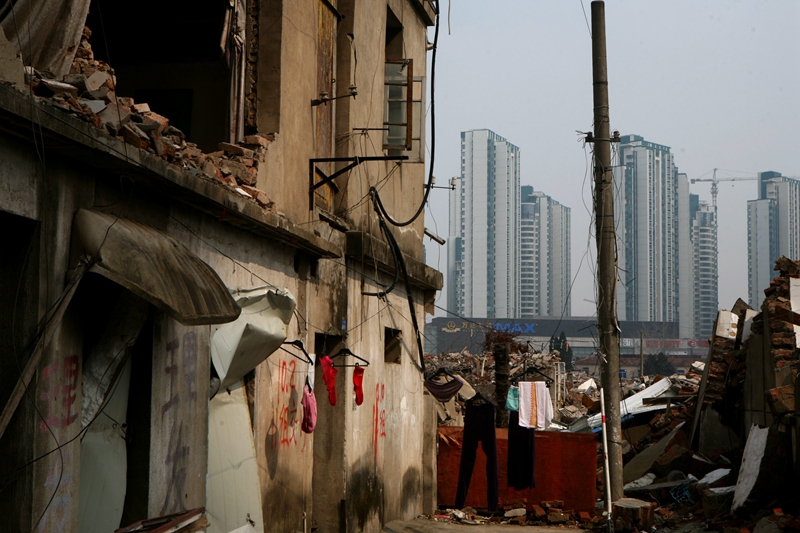 Reports last week that the China Development Bank (CDB) had halted funding for new shantytown redevelopment projects across the country have highlighted the unintended problems the national slum-clearing effort has caused in recent years.

The government policy lender later denied that it had cut off support for local government shantytown redevelopment. Sources at the bank said some local governments had been forced to halt renovations of slum housing because of central government limits on local debt.

However, the CDB did tighten the approval process for new shantytown redevelopment loans, with the bank’s Beijing headquarters taking back control from its branches, Caixin learned from sources close to the bank.

Launched in 2005 as a large-scale urban revitalization drive, shantytown redevelopment in China aims to replace suboptimal and even dangerous living conditions in urban areas with modern homes through projects run by local governments.

But concerns are mounting that shantytown redevelopment is being used as an excuse for local governments to accumulate additional hidden debt, while heating up housing markets in China’s smaller third- and fourth-tier cities.

In 2015, the State Council, China’ cabinet, issued a policy document allowing local governments to give monetary compensation to residents displaced by renovations as a first resort, over the alternative of compensating them with actual new homes. As a result, monetary compensation grew to more than 50% of all redevelopment compensation in 2017, a sharp increase from just 9% in 2014. The practice, which injects money into the local housing market without increasing the housing stock, has helped push up housing prices.

The majority of funds for shantytown redevelopment comes from loans granted by policy banks like the China Development Bank. These loans, in turn, are largely funded by money from the People’s Bank of China, the nation’s central bank, which it lends to policy banks through a special facility known as Pledged Supplemental Lending.

Because of lax controls on the use of these loans, many local governments have “expanded the category of shantytown redevelopment to suit their whims, ‘packaging’ ordinary projects as shantytown projects” to get around restrictions on other types of local government lending, Xu Zhong, director of the central bank’s research bureau, warned recently.

The central government should set “a clear rule,” and “demonstrate how many shantytown homes have actually been transformed, how effective (redevelopment) has been, what problems there are, and what is actually needed,” a source close to the Ministry of Finance stressed to Caixin.

More importantly, as many bank personnel told Caixin, the ability of local governments to pay back shantytown redevelopment loans in the longer term has never been established.

Under existing rules, local governments that take out loans for shantytown development in the form of service procurement contracts only need to provide upfront funding of as little as 5% of a project’s estimated total cost, with policy banks like the CDB and the Agricultural Development Bank of China supplying the remaining funding through loans with interest rates lower than those for ordinary commercial loans.

Since financing through service procurement contracts can be as much as 40% cheaper than public-private partnership loans — another major financing platform for local governments — and shantytown redevelopment is one of the few types of services for which governments are still allowed to sign procurement contracts, the urban revitalization drive has become an increasingly popular channel for fundraising.

Another problem linked to shantytown redevelopment is the upward pressure it puts on property prices in China’s third- and fourth-tier cities, where most renovation projects take place.

Most redevelopment projects now involve local governments compensating residents of demolished slums with cash rather than new homes, in line with the central government’s 2015 policy allowing this type of compensation as the first option for local governments. Although monetized resettlement indirectly stimulates real estate investment and can add to a city’s housing stock in the long run, it causes a short-term surge in housing demand without directly adding to supply, driving up home prices.

As a consequence, while housing markets in larger first- and second-tier cities were tamed by government price-cooling measures in 2017, markets in smaller third- and fourth-tier cities have continued to boom, with the country’s overall property market turnover reaching 16 trillion yuan in 2017, far exceeding 2016’s 10 trillion yuan. Monetized resettlements pushed the growth rate of residential property sales in 2017 to 4.41%, when the rate would have been 1% without the resettlement cash, according calculations by Fujian-based brokerage Industrial Securities.

China’s central government has attempted to clamp down on local government debt, and in a draft regulation published on June 26, added shantytown redevelopment and poverty alleviation projects to the list of areas in which local governments could not sign service procurement contracts. The public consultation period for the draft ends in late-July, meaning the regulation could go into effect by the end of this year.

“At the moment, there is a possibility that the two openings (for additional local government borrowing) of shantytown redevelopment and relocation from impoverished areas could be closed,” Zhao Quanhou, director of the Ministry of Finance’s Research Institute for Fiscal Science, told Caixin. “There is no clear signal, and we can’t say that these openings have been closed at the moment, but we can say there are signs pointing that way.”

Monetized resettlement should be halted in third- and fourth-tier cities where housing prices are surging, Yin Zhongli, a researcher at the Chinese Academy of Social Sciences, stressed.

As Citic Securities real estate analysts pointed out, the original intention behind monetizing shantytown redevelopment compensation was to help whittle down large real estate inventories in third- and fourth-tier cities to eliminate their housing overhang. But now that these excess inventories are largely gone, some local governments have shifted their strategies. Shandong province, for instance, no longer offers monetary compensation to former slum residents, while Jiangxi province now requires cities and counties with tight housing supplies to focus on providing new homes, rather than money, to dislocated slum residents.

However, some analysts warn that a sharp drop in the level of monetized resettlement compensation could cause a complete collapse of housing prices in some third- and fourth-tier cities, many of which are already experiencing a net migration outflow.

Situations in third- and fourth-tier cities are varied. In many cities, like Xuzhou city in Jiangsu province, monetized resettlement compensation accounts for more than half of the liquidity in the local property market. Offering physical instead of monetized resettlement compensation would greatly reduce that liquidity, adversely affecting prices. Moreover, the quality of government housing is likely to be lower than that of commercial housing, making a new government-sponsored home harder to resell. As a result, cities like Xuzhou would suffer greatly from cuts to monetized resettlement, a real estate industry insider told Caixin.

Other small cities, like Huzhou in Zhejiang province, would fare better. Because of its proximity to Shanghai and its pleasant natural environmment, Huzhou has become a popular holiday destination and demand for housing there is naturally strong among both local and foreign investors. Reducing monetized resettlement in Huzhou could remove an “irritant” and so benefit the local housing market, personnel from top Chinese property developer Country Garden told Caixin.