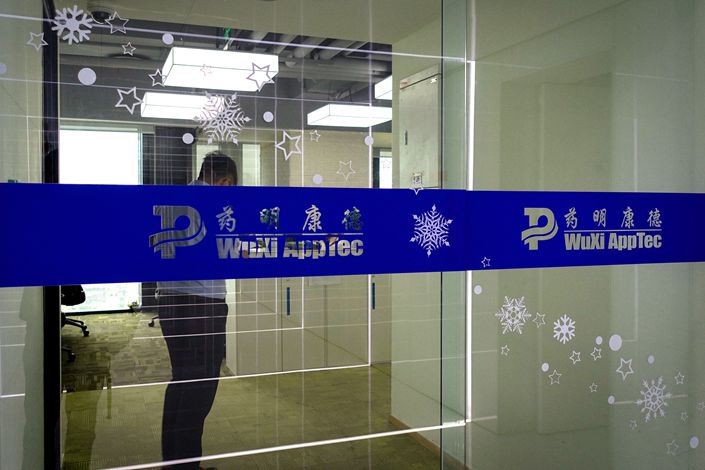 The offices of WuXi AppTec Co. Ltd. are seen in Shanghai on April 23. Photo: VCG

Biotech firm WuXi AppTec Co. Ltd. said its board has approved a plan for a second listing in Hong Kong, taking advantage of recently revised rules that allow companies from certain high-growth sectors to list on the city’s main board even if they are losing money.

AppTec made similar headlines in May, when it became China’s first drugmaker to list in Shanghai under an expedited listing process aimed at bringing more high-growth, high-quality companies to Chinese investors. Following its trading debut, the stock rose more than sixfold from its initial public offering (IPO) price before peaking. Even after subsequent declines, the shares still trade at more than four times their IPO price.

Now the company’s board has unanimously approved the plan for a second concurrent listing on Hong Kong’s main board, using 10% to 15% of its enlarged share capital, AppTec said in a statement to the Shanghai Stock Exchange dated Monday. That could make the offering worth up to $2.2 billion based on the company’s latest market value.

WuXi AppTec did not give any additional details for the proposed offering, including a timeline or share price, saying only it will make such moves at suitable times.

WuXi AppTec is a unit of the formerly U.S.-listed WuXi PharmaTech, which privatized from New York in 2015 due to lack of interest from American investors. Its popularity in China partly reflects the lack of similar choices for Chinese investors, whose markets are dominated by big companies with state-run backgrounds from traditional industries.

Such newer-economy companies like AppTec are being aggressively courted by both Beijing and Hong Kong, whose listing rules previously precluded listings for any money-losing companies. Both markets have relaxed such rules this year for high-quality companies with big growth potential, paving the way for a new wave of listings.

Last month, clinical-stage diabetes drug developer Hua Medicine filed for an IPO in Hong Kong, the second pharmaceutical firm to do so under the relaxed rules. In China, the new rules also allow such high-growth candidates to get expedited reviews for listings, which paved the way for the 27 billion yuan IPO by high-tech equipment-maker Foxconn Industrial Internet Co. Ltd. in June.

This story has been corrected to show that AppTec is not unprofitable.