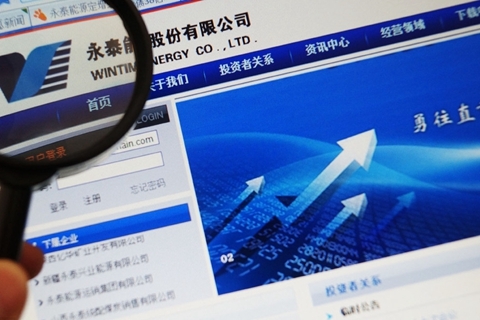 Wintime and subsidiaries have outstanding bonds and debt securities worth a total of 27.4 billion yuan. Photo: IC

The Shanghai Clearing House didn’t receive interest payments from Wintime Energy for a bond issued in 2017, the clearing house said late Thursday in a statement. The missed payments triggered cross defaults of other debt securities issued by Wintime, according to the statement.

As of June 29, Shanghai-listed Wintime and subsidiaries had outstanding bonds and debt securities totaling 27.4 billion yuan, including $500 million of U.S. dollar-based offshore bonds, market records show. The company is the second-largest corporate debtor in the bond market behind only embattled financial conglomerate CEFC China Energy, with 29.6 billion yuan of outstanding bonds.

The Wintime case continues a surge of defaults this year as tighter credit and rising borrowing costs squeeze overextended companies with weak funding bases. Corporate borrowers have missed payments on 24 domestic bonds this year, according to data compiled by Hithink Royalflush Info. There were about 66.3 billion yuan of bonds in default at the end of May, or 0.39% of total outstanding corporate bonds, according to the People’s Bank of China.

Wintime faces interest payments on another bond next Monday. The company will have 4.59 billion yuan of bonds and debt securities maturing by the end of August.

Caixin learned that many private equity firms have charged high commission fees to small companies looking for funding through bond issuance. The private equity firms then repackaged the bonds and resold them to investors. Such practices made it possible for many ineligible firms to issue bonds, sources said.

According to Wintime’s financial reports, the company had liabilities totaling 78 billion yuan at the end of March, nearly 73% of its total assets. The company’s annual revenue in 2017 was just 22.4 billion yuan with net profit of 867 million yuan.