By Li Yukun and Han Wei 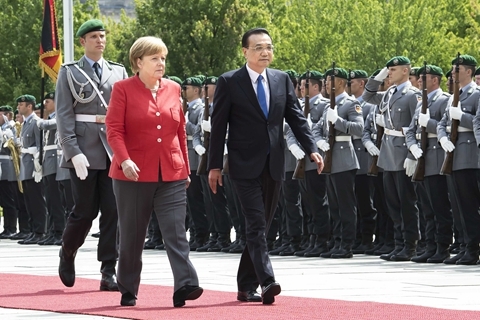 Attending an autonomous driving show with German Chancellor Angela Merkel this week, the premier told German auto executives that they are welcome to take majority ownership of joint ventures in China, according to the State Council’s official social media account.

It was the first time a top Chinese leader openly invited foreign investors to expand in the country’s tightly held auto industry, signaling China’s opening-up efforts in the face of intensifying trade friction with the U.S.

Li said China is promoting a new round of market opening to drop limits on foreign investment in the domestic auto industry. The premier also pledged fair treatment to foreign-funded automakers in the country’s new-energy vehicle subsidy policies.

China announced in April a timetable for removing restrictions on foreign investment in domestic auto manufacturing ventures. Foreign automakers will be allowed to set up wholly owned electric-vehicle plants by the end of this year and take full control of conventional auto manufacturers by 2023.

Tesla Inc. is expected to be the first to set up a wholly owned electric car plant in China following the policy shifts. The U.S. carmaker signed agreements Tuesday with Shanghai authorities to build its first overseas Gigafactory in the city.

Li told media in Germany that BMW Group will be the “first” to get majority ownership of its China venture, fueling speculation that the German company will increase its current 50% stake in the decade-old venture BMW Brilliance Automotive.

The German business magazine Manager Magazin reported Thursday that BMW will raise its stake in Shenyang-based BMW Brilliance, its venture with Brilliance Auto since 2003, to more than 75%. BMW declined to comment.

China is BMW’s largest market with sales of nearly 600,000 vehicles last year, an increase of 15% from the previous year. On Tuesday, BMW unveiled a plan to set up a 50-50 joint venture with China’s Great Wall Motor Co. to produce a battery-powered Mini as part of a slew of commercial deals worth $30 billion signed between China and Germany during Li’s visit.