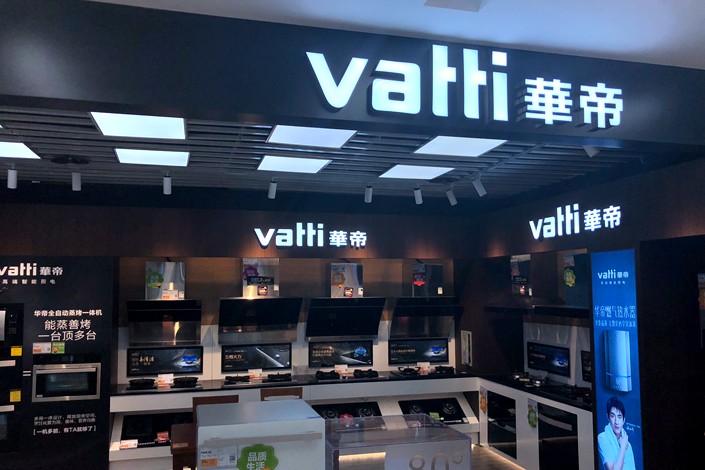 A Vatti store in Shanghai, pictured on July 12. Photo: VCG

A Chinese sponsor of the new World Cup champion began giving refunds to some customers on Monday, honoring a popular promotion promising such rewards if team France won the tournament.

France delivered on that promise, handily defeating underdog Croatia to take the title 4-2. That victory won semi-sweet honors for the team’s Chinese sponsor Vatti Corp. Ltd., which got to say it backed the winner but also had to pay off customers who participated in its popular World Cup promotion.

Despite sacrificing some revenue, Vatti, previously a relatively unknown maker of water heaters and kitchen fans, also came out a winner by posting bigger sales and raising its profile through its successful marketing stunt during one of the world’s top sports tournaments, industry observers said.

Vatti shareholders also celebrated in the victory. Stock of the Shenzhen-listed company rose by as much as 9.79% on Monday, before closing up about 4%, adding nearly $80 million to its market value.

In May, Vatti promised that anyone who bought a specific set of “championship products” between June 1 and July 3 would receive a full refund if France won the tournament. The full product set, which cost up to 4,999 yuan ($747), included a gas stove and a stove-top fan.

The company kicked off the refunding process immediately after France sealed its victory in the early morning hours Beijing time. It clarified that all refunds for products purchased at brick-and-mortar stores would be covered by franchisees. Vatti itself will be responsible only for online-purchases, and such refunds would come in the form of vouchers for other online marketplaces including popular outlets Tmall, JD.com, Suning and Gome.

Online purchases for the products in the promotion came to 29 million yuan, representing about a third of total sales for the “championship products,” Vatti said earlier this month.

Vatti’s promotion demonstrated how to “lever hundreds of kilograms with just a few grams,” said Zhu Danpeng, an analyst with the China Brand Research Institute.

Vatti said earlier that its sales surged during the promotion, and its brand awareness improved. During the campaign, sales at off-line franchises grew 20% to 700 million yuan, with the gain including not only the “championship products” but also other goods like water heaters and sterilizers. Online sales growth was even better, climbing 30% to 300 million yuan.

Vatti is among a larger field of Chinese companies that have ridden the World Cup tide, which has been widely followed in China even though the national team hasn’t qualified since 2002. Seven Chinese firms became the tournament’s sponsors, achieving an unprecedented presence for the country.

Besides paying undisclosed sponsorship fees, the Chinese brands, such as Wanda and Vivo, would have spent $835 million in additional advertising worldwide linked to the tournament, according to Bloomberg, citing Zenith, a media planning arm of French advertising company Publicis Groupe SA.

Vatti spent less than those sponsors and got a more limited outcome because the marketing campaign only approached domestic consumers, Zhu said.