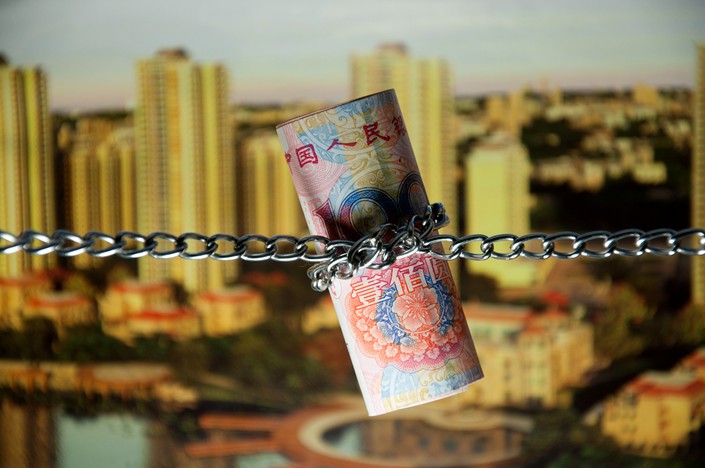 *This practice obscures the true market price of the debt and misleads investors, one observer told Caixin

(Beijing) — The growing distress in China’s $4 trillion corporate bond market, which saw a record number of defaults in the first five months of 2018, has turned the spotlight onto companies managing private funds who have made millions from arranging deals for desperate companies in exchange for under-the-table cash payments.

Interviews with bond underwriters, securities firms, fund managers and traders reveal that many private funds, whose function has traditionally been to invest and manage money on behalf of institutions and wealthy individuals, have been boosting their income by acting as intermediaries to help companies with low creditworthiness issue bonds.

Some funds have taken on the role of investment banks, offering a full-service package for companies that includes a promise to introduce them to small securities firms that have a license to underwrite bond issues and to find buyers for the bonds. They may also pledge to buy the bonds if the issuance is not fully subscribed and then stuff them into the asset management products they sell to clients including commercial banks. The fees charged by the funds and the commissions they earn are not disclosed to investors in bond prospectuses and are often hidden in the price of the bond or the interest rate the company pays investors.

Although technically the funds aren’t underwriting the bonds because they don’t have a license, in reality that is what they are doing. Some brokerage firms, particularly smaller ones, have been happy to take on the business in order to boost their revenue and raise their profile in the underwriting league tables.

Sources in the bond market said that investors are the losers in the game because with private funds guaranteeing to buy the bonds, securities firms are not conducting the necessary due diligence on the borrowers and their ability to repay their debts. The practice has also boosted sales of junk bonds, high-risk bonds from low-quality companies that have a greater risk of defaulting, they said, and contributed to the jump in corporate bond defaults in the first half of 2018.

“These practices have had a very harmful impact and have really messed up the bond market ecosystem,” a veteran bond market watcher who declined to be named told Caixin. “These private funds that act as intermediaries and take kickbacks and commissions need to be severely punished, otherwise the bond market will descend into chaos.”

“This is a serious illness that’s afflicting the bond market,” he said. “Issuers are not being transparent about the fees and this is cheating investors out of their returns, distorting the pricing mechanism of the bond market and destabilizing market order. If bonds are being issued on the basis of commission, it renders market-based pricing meaningless.”

This shadow underwriting has been an open secret in China’s bond market for years, and in good times, when loose monetary policy and lax regulation kept floods of money sloshing around the financial system, it was a win-win for everyone. Small companies found an easy, albeit expensive, route to raise money; private funds made money from investment consultancy fees and commissions from arranging sales; while smaller brokerages, who struggled to compete with the big players, gained more clients and underwriting business.

Market participants told Caixin that private-fund managers have been careful to conceal their activities, making sure their names don’t appear in any formal material related to a corporate bond sale including the prospectus and underwriting agreements. Fees are paid under the table.

“All the materials on the surface are formal, and the underwriters, banks, and securities companies are all licensed,” a bond-market trader said.

Industry sources told Caixin that arranging such deals was much more lucrative then the wafer-thin margins on managing assets. Private funds charged fees of around 0.3% for managing bond funds compared with 2% for other types of investment such as equity funds. The returns made by bond funds are also relatively low. But commissions on arranging the issuance of a three-year bond could amount to 3% of the value of the funds raised and as much as 8% in some cases, the sources said. Securities firms who technically underwrote the bond sale would be paid an underwriting fee of around 1% of the funds raised.

The lure of higher fees encouraged private funds and smaller brokerages to expand this line of business which led to a surge in issuance of higher-risk bonds from low-quality issuers. Companies which couldn’t get bank loans were attracted by the prospect of being able to raise money and were prepared to pay up.

On one bond, Dandong Port paid a 7% coupon rate and another 8% in fees, a bond market source told Caixin. Along with other charges that included underwriting fees, the company’s total costs amounted to about 18% of the total amount raised, the source said.

Dandong Port has defaulted on a series of bonds since last year including 2.01 billion yuan of medium-term notes in March 2018. BOCO Inter-Telecom, a telecom equipment maker, has announced this year that it cannot repay four of its bonds.

“It seems like the more commission a corporate bond issuer has been charged, the bigger the default risk,” a bond trader told Caixin. “I invested in a bond that is about to default and the head of our fix-income department is asking what kind of commissions it paid.”

Failure to disclose commissions and fees could be considered fraud, according to Yang Tiecheng, a partner specializing in financial supervision at Han Kun Law Offices, a Beijing-based law firm.

“If commission fees are part of this it should be disclosed to investors,” Yang said. “If they aren’t, then the issuer and the underwriter could fall under suspicion of fraudulent conduct.

“These companies are low quality and they wouldn’t normally be able to raise money (from the securities market),” Yang said. “But you’re dressing them up and at the same time plowing your own money into them, which is misleading investors and doesn’t reflect the true market price of the debt.”

The commission gravy train may now be heading for the buffers as a result of the government’s campaign to rein in leverage in the financial sector which has led to tighter liquidity in the bond market. A regulatory overhaul of the asset management industry and curbs on banks’ sales of wealth management products (WMPs) have also reduced the amount of money available to invest in bonds, making it harder for heavily indebted companies to refinance their borrowings.

These factors have contributed to the surge in corporate bond defaults this year and investors have become increasingly edgy about buying corporate bonds. That’s led to a slump in the assets managed by many private funds, including those who aggressively built up their intermediary business and held bonds that ended up falling into default. Genial Flow, Blue Stone, Qian Wei and Colight have all sustained losses from some of the biggest corporate defaults –– shoemaker Fuguiniao Co. Ltd., Dandong Port and BOCO Inter-Telecom –– and some traders told Caixin they suspect the funds may have been involved as intermediaries for the sales.

As a result, investors have given the cold shoulder to some bonds.

“Now nobody wants to touch bonds that have the fingerprints of private funds on them,” a bond trader with a brokerage firm told Caixin. “Who knows what kind of tricks have gone on behind the scenes.”

The China Securities Regulatory Commission and the National Association of Financial Market Institutional Investors, who regulate the bond market, have so far taken no action to directly tackle the problem, although sources close to the organizations told Caixin that such practices, if uncovered, would amount to commercial bribery.

The lack of evidence “is an excuse for regulators to play dumb and leave things as they are,” one bond market participant said.

Rules already exist that ban private-fund managers from engaging in business unrelated to fund products or where there could be a conflict of interest. And at the end of 2017, the commission issued regulations banning bribes disguised as financial advisory fees or “activity” fees in the investment banking sector, but they did not address the issue of commission charged by private-fund managers.

With regulators remaining on the sidelines, investors are left with little choice but to separate the wheat from the chaff themselves. Some of the big commercial banks are lending a helping hand — Industrial and Commercial Bank of China (ICBC), the country’s biggest lender by assets, has marginalized private funds from its “white list” of fund managers it deems trustworthy.

In ICBC’s 2017 white list of the top 50 fund managers, which has been seen by Caixin, securities firms and mutual fund managers emerged as the top choices for the bank to direct funds toward, while Genial Flow ranked 44th, meaning it is unlikely to receive much of the bank’s investment funds anymore.

"The risks attached to this kind of poor quality debt will be exposed sooner or later, and the chain of commissions will be broken,” another veteran bond-watcher told Caixin. “And when the tide goes out, we’ll find out who’s been swimming naked."