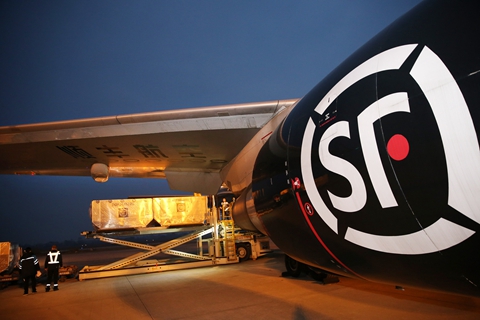 SF Express launched services in 53 countries and regions as of the end of 2017. Photo: VCG

The five-year bonds, to be issued by the wholly owned subsidiary SF Holding Investment Ltd., were priced for an annual yield at 4.125%, according to an SF Express filing Friday. The bonds will be traded on the Hong Kong stock exchange.

SF Express is the first Chinese logistics business that has tapped the overseas bond market. The company said earlier that the proceeds of the bond sale will be used to repay debts with overseas banks, replenish working capital and expand business abroad.

Amid heated competition at home, SF Express has stepped up efforts to expand its network globally. The company said its services extended to 53 countries and regions by the end of 2017 and generated more than 2 billion yuan ($294 million) of revenue for the year, up 43.7% from the previous year.

International rating companies published positive views of the SF Express bond issue. Moody’s rated SF Express at A3 while Standard & Poor’s and Fitch Ratings each gave it a rating of A-. The ratings are higher than those of international delivery giants DHL and FedEx.

Cathy Chao, associate director at Fitch Ratings’ Asia-Pacific operation, said SF Express has maintained annual growth of more than 10% and has stronger growth prospects than global rivals such as DHL, although DHL has a more diverse business. Fitch rated DHL at BBB+.

But Fitch also warned that SF Express may see rising capital expenditures as the company speeds up expansion.

In September, SF Express announced a $5 million investment in a joint venture with UPS to focus on logistics services for the e-commerce sector.