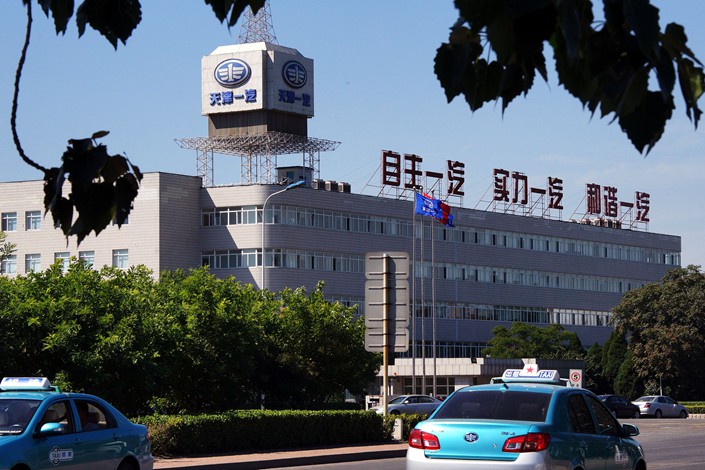 Headquarters of FAW Xiali Automobile, in the Xiqing district of Tianjin, China, on August 31, 2016: Photo: VCG

FAW Xiali Automobile Co. Ltd. wants to dump one of its money-losing car units as it embarks on a restructuring plan to shore up its finances and searches for a partner to help it develop new-energy vehicles.

The board of Shenzhen-listed FAW Xiali – a subsidiary of FAW Group, China’s oldest state-owned automaker – unanimously agreed to sell off its FAW Huali unit for a symbolic 1 yuan (15 U.S. cents), the automaker said in a statement (link in Chinese) on Thursday. As part of the deal, the buyer would still have to take over the unit’s 800- million-yuan debt owed to FAW Xiali.

FAW Huali, which was founded in 1965 and specialized in compact vehicles for both commercial and individual use, got its current name in 2002 when it became part of the FAW Group. It was then merged into sister firm FAW Xiali in 2008, as part of FAW Group’s broader consolidation plan.

However, that merger failed to turn around FAW Huali’s lackluster business, with sales continuing to erode over the decade since. FAW Huali recorded revenues of 45 million yuan last year, half the 95 million yuan of sales it recorded only two years earlier.

Still, FAW Huali has one very valuable asset in the current business environment: a government permit that allows it to manufacture new-energy vehicles, which will be very attractive to bidders who want to produce such vehicles but failed to secure their own permits. Since the middle of last year, China suspended the issuance of such permits to stop the flood of companies trying to enter the new-energy vehicle business.

FAW Xiali has itself struggled with a declining share of China’s highly competitive auto market in recent years. In November, FAW Group said it wanted to sell 30% of its stake in FAW Xiali, aiming to transform it into a new-energy vehicle maker. That offer has been met with lukewarm interest from investors.