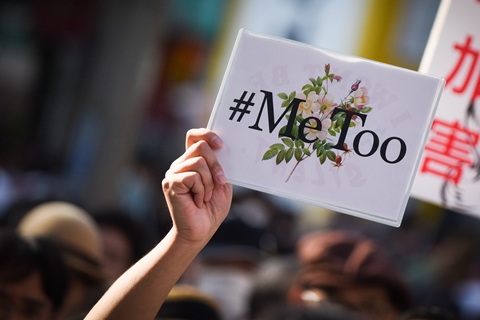 Zhu Jun, a household-name TV personality, became one of the latest to be accused of sexual assault in the #MeToo movement sweeping China.

A former intern for Zhu’s show posted a lengthy account Thursday on China’s social media platform Sina Weibo of how she was molested by Zhu four years ago. The post went viral but was quickly taken down from Weibo.

The intern’s story emerged as the #MeToo movement reached a new height in China this week after a number of well-known figures were accused of sexual assault or harassment. Many of them are NGO activists or public intellectuals who have been viewed as champions of progressive values.

The allegations of sexual misconduct sweeping China’s civil society come after the emergence of the #MeToo movement abroad and after months of similar reckonings in the country’s education institutions, implicating a number of academics including four members of China’s prestigious Changjiang scholars program.

Zhu, 54, is one of China’s most famous TV hosts, known for his signature sentimental style in interviewing celebrities. He is also a long-time host of the “Spring Festival Gala” show on China Central Television (CCTV), China’s state-run TV network. Hundreds of millions of Chinese ritualistically tune in to watch the show on New Year’s Eve.

Zhu is known as China’s Charlie Rose, after the affable and once-popular former American TV news personality and interviewer of politicians and celebrities. (Rose’s career ended last year amid allegations of sexual harassment.)

The former intern spoke to Caixin Friday under the pseudonym of Xianzi. Xianzi said she reported the incident to the police after it happened but was dissuaded by police from pursuing it any further. The ongoing #MeToo movement inspired her to speak out again, she said.

In 2014, Xianzi was a junior student at a Beijing-based college. She got an internship at CCTV working on Zhu’s “Artistic Life” show.

Hoping to interview Zhu for a school assignment, Xianzi went with a fellow intern to Zhu’s dressing room one afternoon. After the other intern left, Zhu started to offer unsolicited “help” to Xianzi, such as finding her a job at CCTV or getting her into graduate school. Before she knew it, Zhu was “molesting (me) through (my) clothes, ignoring my resistance,” Xianzi said. The appearance of the show’s guest interrupted and allowed Xianzi to escape.

“He probably didn't think he was molesting me,” Xianzi told Caixin. She realized that for many men in a position of power, it was nothing unusual to take advantage of younger females, she said.

Xianzi did not immediately think about reporting to the police. She said she was not sure whether anything could be done since the molestation did not turn into rape. But a teacher from her university persuaded her to take action, she said.

As Xianzi told Chen Shiting (a pseudonym), her trusted teacher at the university, about what happened, Chen suggested that it might not be the first time for Zhu to engage in such behavior. The two agreed that Zhu needed to be stopped before more women had the same experience. After consulting with a lawyer friend, Chen accompanied Xianzi to the police station to report the incident.

The police retrieved a video from the surveillance camera outside Zhu’s dressing room. It showed that Xianzi was wiping her lips as she walked out of the room, which was consistent with her account of a forced kiss. The police also took DNA and blood samples.

Chen said she was impressed by a young policeman who talked privately with her. “Thank you for reporting this,” he said, according to Chen. “This is not the only incident we have. I do hope that you will persist.”

However, the case was handed over to two other policemen, who tried to persuade them not to proceed with the filing. Another of Xianzi’s university teachers, who helped arrange the internship and took a post at CCTV at the time, also urged Xianzi to give up.

Frustrated and concerned about her parents, who became anxious at the news, Xianzi decided not to push further.

“The police never informed me of the progress of the investigation afterwards,” Xianzi told Caixin. “I don’t even know if this case was considered filed officially.” The police did not provide any confirmation note to Xianzi of the filing.

Xianzi said she has never received any apology from Zhu.

“Even though we did not achieve what we wanted, as long we reported to the police, there was bound to be some record. It was at least a deterrence,” Chen said.

Asang (a pseudonym), Xianzi’s fellow intern at CCTV, confirmed the incident with Caixin. Xianzi told him of the incident immediately after walking out of Zhu’s dressing room, Asang said.

Zhang Fang (a pseudonym), the lawyer who was present when Xianzi reported to the police, said that despite the seemingly comprehensive stipulations in China’s laws to protect women’s rights, in practice such protections are compromised by social norms.

“I only gradually realized that sexual violence is so common in our life but yet overlooked or even accepted.” Xianzi said. “I hope legal procedures will become available someday in the future.”