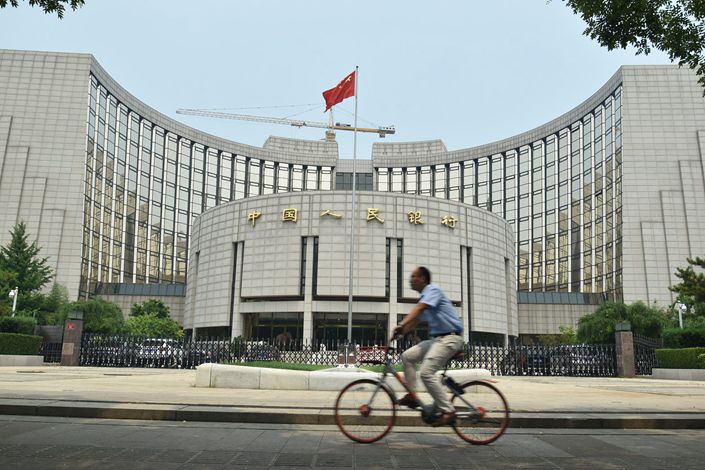 A cyclist bikes past the People’s Bank of China in Beijing on July 5. Photo: VCG

The People’s Bank of China (PBOC) has internally approved the appointment of Liu Guoqiang, previously one of its assistant governors, and Zhu Hexin, a former vice president of the Bank of China, as new deputy governors, sources told Caixin.

In March, a major overhaul of China’s financial regulatory framework gave the PBOC new responsibilities, including drafting key rules and setting macro prudential regulations for the banking and insurance sectors. Liu and Zhu, who have years of experience in macroeconomic policy and the banking industry respectively, will be expected to help steer the central bank in its newly expanded role.

Caixin also learned that either Liu or Zhu will be appointed deputy director of the cabinet-level Financial Stability and Development Committee (FSDC), set up in November to coordinate financial policy among regulatory bodies.

The FSDC, which is headed by Vice Premier Liu He, already has two deputy directors — PBOC Governor Yi Gang and State Council Deputy Secretary-General Ding Xuedong. The central bank is set to further consolidate its leadership of the country’s financial policy with the entry of either Liu or Zhu into the FSDC.

Liu started his career in the National Bureau of Statistics (NBS) in 1984. He worked there for 18 years, analyzing macroeconomic data and giving advice on macroeconomic policy.

In 2001, he joined the general office of the Central Financial and Economic Affairs Commission, a department under the Communist Party’s Central Committee, where he became a department director-general in 2014. From 2008 to 2010, Liu was temporarily sent to South China’s Guangdong province, where he served on local party committees.

Although Liu has kept a relatively low public profile, he has played an important role behind the scenes, drafting policies for the National Financial Work Conferences in recent years.

He worked closely with Liu He during his time at the Central Leading Group, and became known for his calm manner and steady presence, sources told Caixin.

Liu Guoqiang was appointed assistant governor — one rank beneath deputy director — of the PBOC in December 2016, when he was put in charge of anti-money laundering and investor protection efforts. Liu is a top candidate for the FDSC deputy director post because of his familiarity with the PBOC and his local government experience, multiple people familiar with the matter told Caixin.

Zhu began his banking career at the Bank of Communications in 1993, where he eventually became the general manager of the bank’s business department.

In June 2015, Zhu left the Bank of Communications to serve as vice president of the Bank of China, one of the country’s four biggest lenders. At the same time, he took on the role of managing executive, overseeing accounting, technology, payment, clearance and operations at the bank.

A source close to the Bank of China described Zhu as pragmatic and skilled at coordinating among departments. “Zhu was able to resolve conflicts swiftly and lifted the whole sector’s efficiency,” a source told Caixin.

In 2016, Zhu was appointed deputy governor of Southwest China’s Sichuan province. Financial regulators in China are frequently given local government responsibilities in order to build up their understanding of local economies and financial misconduct before a major promotion.