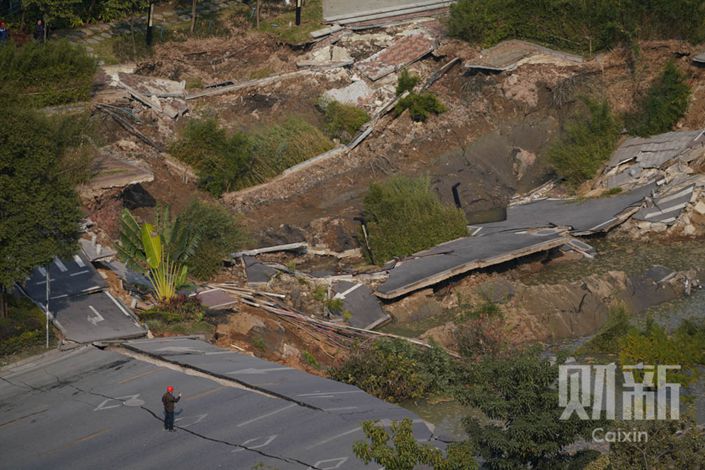 The scene of a subway-tunnel collapse is seen in Foshan, Guangdong province, on Feb. 8. Photo: Liang Yingfei/Caixin

A deadly collapse of a subway tunnel under construction in the southern city of Foshan in February was the result of misjudgment and negligence, according to the results of an investigation released this week.

The collapse on the No. 2 subway line in southern China’s Guangdong province killed 11 workers and injured eight others on Feb. 7. Another worker remains unaccounted for, with direct economic losses of more than 53 million yuan ($7.8 million) resulting from the accident.

The tragedy was the latest in a string of similar accidents, some fatal, linked to a boom in the development of new urban rail and subway systems in recent years. Chinese cities have been racing to build such systems to accommodate their swollen populations — the result of massive urban migration that has underpinned the country’s rapid industrialization.

In the Foshan case, the deaths likely could have been avoided if the project manager had ordered an immediate evacuation at the first signs of trouble, according to a report released by the provincial work safety administration on Monday.

Workers were cleaning machinery inside the tunnel close to 7 p.m. on the day of the accident when they noticed a mud eruption that had pushed up the level of muddy water inside the tunnel, according to the report, citing accounts from surviving workers.

Chen Chao, a site manager in charge of the machinery unit, misjudged the emergency and so didn’t order an immediate pullout of workers after being informed of the situation, according to investigators. Instead, over the next two hours he ordered more workers to go down to try to contain the eruption, the report said. Chen himself rushed down close to 8 p.m.

It was too late when he ordered the 39 workers to leave and have the high-voltage electricity supply cut off before the group was overcome by a torrent of mud and waves of hot air. Chen was among the 10 who were buried and found dead at the scene after a massive collapse triggered by the mud eruption. Another worker died in the hospital, while another remains unaccounted for, according to the report.

Eight of the 27 who managed to flee or were rescued suffered various injuries. The construction company contracted by the city to build the line was accused of putting productivity and deadlines ahead of safety.

Before the deadly collapse, state-owned CCCC Foshan Investment & Development Co. had been served with 19 warnings over potential safety hazards from a company contracted to supervise safety of the project since June 2017, according to the report.

Thirty-one employees and government officials who oversaw the project, including chief engineers and a deputy chief engineer in charge of the machinery unit, were punished over the accident.