On Beijing’s Orders, Tsinghua May Give Up Control of Chipmaker Units 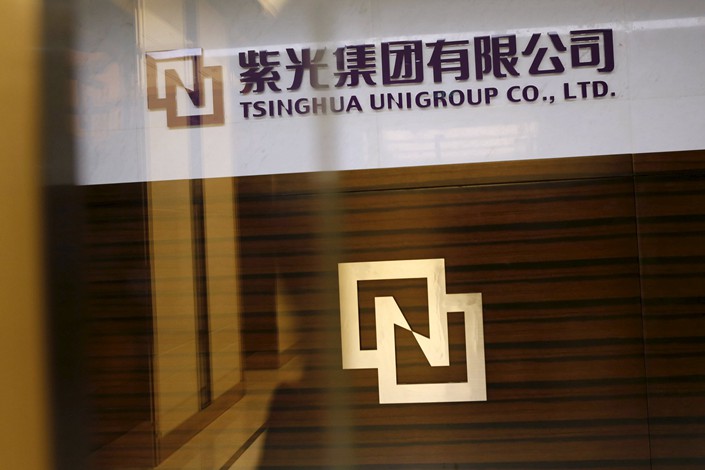 The office of Tsinghua Unigroup Co. Ltd. is seen in Beijing in November 2015. Photo: VCG

A business group founded by prestigious Tsinghua University will divest part of its stake in a major domestic chipmaker, following the May announcement of a policy to reorganize colleges’ commercial assets.

Tsinghua Holdings Co. Ltd., set up in 2003 by the public university, known for engineering research and development capabilities, is considering unloading part of its 51% stake in Tsinghua Unigroup Co. Ltd., which produces smartphone chips and provides cloud services, according to stock filings that were submitted over the weekend by two Shenzhen-listed Unigroup subsidiaries and a Hong Kong-listed unit.

The upcoming equity transaction may result in change of the de facto controller of the three subsidiaries — Shenzhen-listed Unigroup Guoxin Microelectronics Co. Ltd. and Unisplendour Corp. Ltd., as well as Hong Kong-listed Unisplendour Technology (Holdings) Ltd. — which are now controlled by the state-owned Tsinghua Holdings, the companies said.

A source with knowledge of the matter told Caixin that the plan is being carried out to meet the government’s call for the downsizing of university-affiliated enterprises, but the sale is still subject to uncertainties.

In May, the central committee for deepening overall reform under the ruling Communist Party approved a guideline to reform enterprises under colleges and universities, which “should follow the path of state capital management reform” and “enable universities to focus on education,” according to the official Xinhua News Agency.

Starting in 2015, Beijing rolled out so-called mixed-ownership reform among state-owned enterprises (SOEs), which aims to bring private-sector investment and management into the SOEs, many operating in state-monopolized sectors, to make them more dynamic.

Besides the planned equity sale, Tsinghua University has decided to bring investors from both the state-owned and private sectors into another subsidiary, Tus-Holdings Co. Ltd., which operates the school’s incubators and industrial parks, government-owned media outlet The Beijing News reported.

Last year, the Communist Party sent anti-graft inspectors to centrally administrated universities, including Tsinghua — which is China’s top university, according to the latest rankings compiled by U.K. education specialist Quacquarelli Symonds. In a response to the scrutiny, the school vowed (link in Chinese) to restructure its businesses and downsize indirectly owned equities to lower the risks.

Shares of the three Tsinghua units that are likely to be affected by the equity transaction all picked up on Monday.

Hong Kong-listed Unisplendour Technology shares went up by 1.85%, while shares of Shenzhen-listed Unigroup Guoxin and Unisplendour Corp. gained 4.05% and 5.91% respectively.