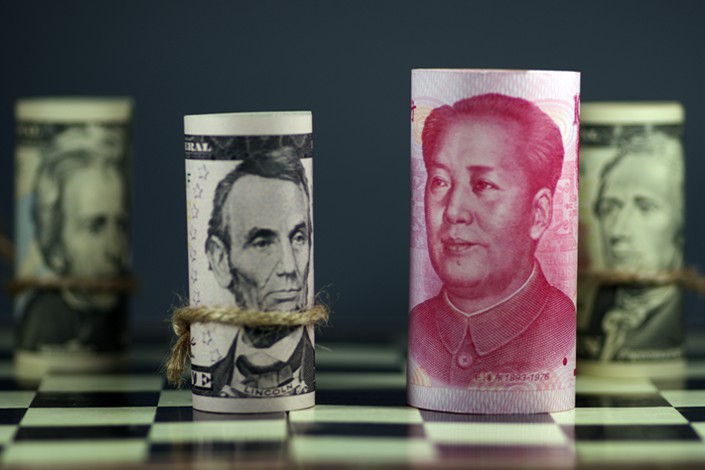 China’s Ministry of Commerce called on the U.S. to treat Chinese investors fairly and create a “stable and predictable” environment for businesses. Photo: VCG

* New law expands the jurisdiction of the Committee on Foreign Investment in the U.S., allowing it to review a broader range of mergers and acquisitions

“We are strongly dissatisfied with the US’ bent on passing and signing the National Defense Authorization Act for Fiscal Year 2019 which includes negative China-related content in disregard of China’s firm opposition,” Lu Kang, a spokesman for the Ministry of Foreign Affairs, said in a statement.

“We urge the US to discard the Cold War mentality and zero-sum game mindset… and refrain from implementing the relevant negative China-related provisions, lest it should undermine the China-US relations and bilateral cooperation in key areas,” he said.

Trump approved the $716 billion defense spending bill on Monday U.S. time. It includes measures to overhaul the Committee on Foreign Investment in the United States (CFIUS), an interagency panel charged with vetting foreign investments that could affect national security.

The legislation expands the jurisdiction of the CFIUS, allowing it to review a broader range of mergers and acquisitions that are not currently under its jurisdiction, such as the purchase of minority stakes by foreign companies, as well as private equity and venture capital deals. The law also grants government agencies greater oversight and control of exports of “emerging and foundational” U.S. technologies.

Although the law does not single out specific countries, it comes at a time when concerns in the U.S. are mounting over Chinese companies’ acquisitions of American technologies. China is seeking to upgrade its industrial sector into a globally competitive high-tech powerhouse through programs such as “Made in China 2025,” a sore point in intensified trade tensions with the U.S.

China’s Ministry of Commerce on Tuesday called on the U.S. to treat Chinese investors fairly and create a “stable and predictable” environment for businesses. It said China will give the law a “comprehensive assessment” and closely follow its impact on Chinese companies.

“The U.S. should treat Chinese investors in a dispassionate and fair manner and avoid letting national security reviews hinder the cooperation between Chinese and American enterprises,” an unnamed ministry spokesperson said in a statement (link in Chinese).

Also included in the U.S. law is a provision prohibiting U.S. government departments from procuring products from Chinese telecom giants Huawei Technologies Co. Ltd. and ZTE Corp., as well as banning agencies from partnering with companies that use such products.

Washington in April imposed a ban on U.S. companies supplying tech components to ZTE as punishment for the Chinese firm selling U.S.-made components to Iran in violation of U.S. sanctions. The ban was lifted last month after ZTE paid a $1 billion fine, reshuffled its management and agreed to allow on-site U.S. inspectors for 10 years.

Analysts say that although scrutiny imposed by CFIUS does not necessarily block foreign investments, it can act as a strong deterrent to potential investors.

A string of proposed Chinese takeovers of American firms, particularly in the financial and semiconductor sectors, have collapsed either because the CFIUS blocked them or out of concern that they would not gain approval, and the number has continued to grow.

Last week, Shenzhen Energy Group Co. Ltd. said it was terminating a year-old plan to buy three California solar farms for $232 million because it could not get CFIUS approval in time.

Debt-ridden Chinese conglomerate HNA Group in May abandoned its bid to buy a majority stake in U.S. hedge fund SkyBridge Capital about 15 months after reaching a deal, citing uncertainty about the approval process. The CFIUS has also ordered the company to sell its stake in a Manhattan building near Trump Tower, according to foreign media reports over the past week.

Data from Rhodium Group, a New York-based research provider, show that investment by Chinese companies in the U.S. fell to $29 billion in 2017 from $46 billion in 2016. The situation has deteriorated further this year — Rhodium figures show Chinese companies completed acquisitions and greenfield investments worth only $1.8 billion in the first half of 2018, down more than 90% from the same period a year ago and the lowest level in seven years.

Tighter scrutiny over Chinese investment in the U.S. accounted for part of the decline, with Rhodium estimating that deals worth $8 billion were abandoned in 2017 due to CFIUS concerns that could not be resolved. But the research group pointed out that activity was also curtailed by stepped-up controls on outbound investment by authorities in Beijing.