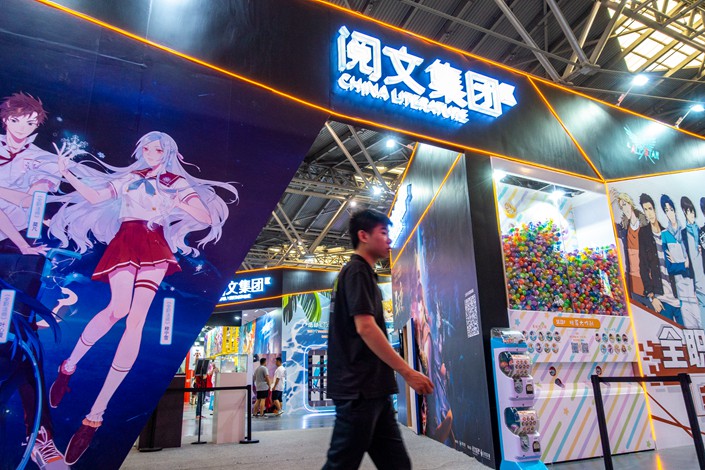 A visitor to the 14th China International Cartoon & Game Expo in Shanghai walks past the China Literature booth on July 6. Photo: IC

China’s major e-book operator is buying a local production house for as much as 15.5 billion yuan ($2.2 billion), a move that analysts said could pave the way for it to become the next Marvel Studios.

China Literature Ltd., an online publishing unit spun off from social media giant Tencent Holdings Ltd., said Monday it will acquire New Classics Media Corp. in a deal expected to close by the end of the year.

Beijing-based New Classics produces TV series, web series and films that include hit titles such as “Never Say Die,” “The First Half of My Life” and “Tiger Mom.”

“It could become the next Marvel — which has both content copyrights and movie productions under one roof,” Meng said.

Based in California, Marvel Studios LLC is an affiliate of Walt Disney Studios dedicated to producing movies based on Marvel Comics characters such as Iron Man, Captain America and Black Panther.

China Literature has the rights to the lion’s share of China’s pool of online authors and readers. It benefits from having its content distributed via Tencent’s mobile apps such as WeChat and Tencent Video. The company boasts 7.3 million writers and 213.5 million monthly active users as of June, according to Bloomberg data.

New Classics could help it drive demand for its content, according to China Literature Co-CEO Wu Wenhui. “Users are increasingly demanding high quality video entertainment content which in turn drives the demand for literary works for various content adaptations,” Wu said in a statement.

“Further enhancing our content adaptation expertise is a natural next step for China Literature to unleash the commercial potential of our content library, drive integrated development of blockbuster titles, and enhance engagement of our writers and users,” he said.

China Literature floated in Hong Kong in November. Its shares doubled on its first trading day after an immensely oversubscribed initial public offering that raised over $1 billion.

The publisher’s profit surged 138.6% year-on-year to 505.8 million yuan, while its revenue rose 18.6% from a year ago to 2.3 billion yuan, according to its financial results for the six months through June, which the company released on Monday.

In January, Tencent made a strategic investment in U.S.-based Skydance Media LLC, a studio involved in the production of sequels to the “Mission: Impossible” and “Terminator” franchises, and has also produced TV series for Netflix and Amazon.