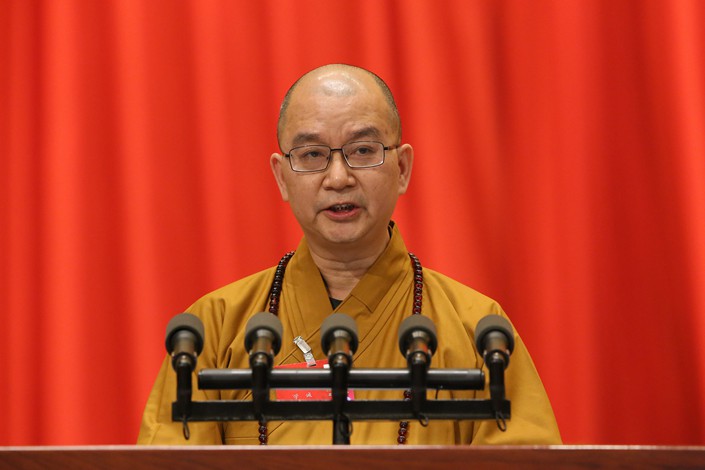 Shi Xuecheng, then chairman of the Buddhist Association of China and a member of the country's political advisory body, gives a speech at national legislative session in Beijing in 2016. Photo: VCG

One of China’s highest-ranking monks has resigned as head of the country’s leading Buddhist organization after being accused of misconduct.

The Buddhist Association of China has accepted the resignation of Shi Xuecheng as chairman, the group said in a statement on its website on Wednesday. It did not elaborate on the reason for the resignation, but added that a deputy chairman, Shi Yanjue, will temporarily head the association.

Xuecheng, 52, was abbot of the Longquan Temple in a northwestern suburb of Beijing. His resignation comes after two fellow temple staff members published a lengthy report accusing him of sexually harassing several female disciples.

The 95-page report, which has been circulated online, has added fuel to recent public fury stemming from a series of alleged sexual abuse cases. Those include one case involving an elite media figure, one involving prominent academics, and another involving the founder of a well-known non-governmental organization, in what many are calling China’s own #MeToo movement.

Xuecheng, who has over 1 million followers on Weibo, China’s equivalent of Twitter, and is known as Master Xuecheng, has previously denied the allegations. His surname, Shi, is used by monks and abbots throughout China, and most are instead called by their individual names.

China’s State Administration for Religious Affairs announced on Aug. 2 that it had received the allegation report, and has started investigating the matter. The report’s two authors, Shi Xianjia and Shi Xianqi, used to serve as discipline inspectors at Longquan Temple. Shi Xianjia was also a secretary for Xuecheng.

The report displayed alleged smartphone message conversations between Xuecheng and some female followers, and accused the abbot of using the messages to sexually harass and mentally control his female disciples. It even accused the abbot of having sexual affairs with some.

Xuecheng became chairman of the Buddhist Association of China in 2015. He is also president of the Buddhist Academy of China, and a standing committee member of the country’s political advisory body, the Chinese People's Political Consultative Conference.

Longquan Temple dates back more than 1,000 years, according to its website. It resumed Buddhist operations in 2005 with Xuecheng, then vice chairman of the Buddhist Association of China, as the new abbot.