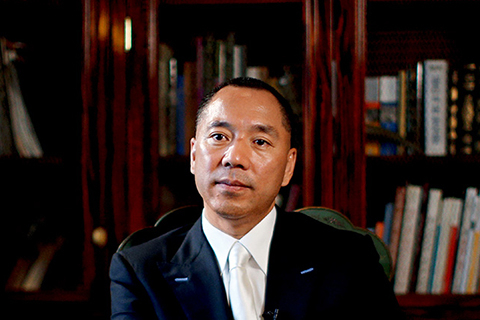 Five senior employees of fugitive Chinese businessman Guo Wengui pleaded guilty to charges of coercion in a business deal and embezzlement Monday in a court in the northeast city of Dalian.

Guo, ranked the 74th-richest businessperson in China in 2014, is believed to be living in the U.S. after he fled China in 2014 to avoid graft investigations that brought down his close ally Ma Jian, the disgraced former vice minister of the Ministry of State Security.

In April, 2017, Chinese authorities requested that Interpol issue a “red notice” for Guo’s arrest. Chinese prosecutors have launched investigations of a series of cases of suspected bribery, embezzlement and fraud involving Guo and his companies.

Separately, court documents released in Hong Kong indicated that Guo is under investigation by police in the special administrative region for allegedly laundering more than HK$32.9 billion ($4.1 billion).

In the Dalian court, the five defendants confessed to collaborating with government officials to engineer a forced takeover of the securities company and embezzling funds from it to benefit Guo’s businesses. The court said sentencing will be announced at a later date.

According to prosecutors, Guo Wengui in 2008 instructed Beijing Zenith investment consultant Guo Hanqiao to work with Minzu Chairman Zhao to seek a takeover of Minzu.

To secure the takeover, Guo asked Ma to threaten and force Minzu shareholders and potential bidders to yield to Beijing Zenith, according to a statement by prosecutors.

Ma sent national security officials to threaten Zhang Hongwei, the chairman of Orient Group Co. Ltd., and forced Zhang to drop a potential bid for Minzu in 2009. Orient Group, a former shareholder of Minzu, had the priority to buy a 6.81% stake in Minzu from Shijiazhuang Commercial Bank at that time under an agreement.

“We had agreed on the deal with Shijiazhuang Commercial Bank and prepared enough money. But Beijing Zenith emerged to compete at the last minute,” Orient Group’s Zhang testified to the court. “A state security ministry official told us not to compete with Beijing Zenith and pressed us to give up the deal on grounds of national security,” Zhang told the court.

Ma was placed under investigation by the ruling Communist Party’s disciplinary agency in January 2015 for corruption and expelled from the party in December 2016. His case is still under criminal investigation.

Guo Hanqiao told the court that Capital Airports set requirements for bidders as demanded by Beijing Zenith so that all other bidders were excluded.

“With backing of the state security ministry, Capital Airports didn’t dare to oppose,” Guo Hanqiao said in his written testimony.

After securing control of Minzu, Guo Wengui ordered executives at the brokerage to help embezzle 2.05 billion yuan to repay debts and for business spending by other companies he controlled, prosecutors said.

“Guo Wengui made Minzu his wallet, and he could take the money whenever he wanted,” Zhao told the court.

While investigations and trials surrounding Guo Wengui unfold on the mainland, police in Hong Kong launched a separate probe of the tycoon for money laundering.

Details of the case were revealed when a Hong Kong court published documents of a judicial challenge filed by Guo seeking to unfreeze bank accounts amid the investigation.

According to court papers, a company owned by Guo Mei, Guo’s daughter, on Aug. 13 filed a judicial challenge in the High Court, demanding the unfreezing of five DBS Bank accounts controlled by Guo Wengui. Police froze the accounts in July 2017 amid investigation of Guo Wengui and suspected accomplices, including his son and daughter, for allegedly laundering HK$32.9 billion.

The frozen accounts contained at least 1.4 billion yuan, including $93 million raised from Abu Dhabi’s sovereign wealth fund to repay debts, according to the court document.

Caixin reported last year that Guo had lured billions of dollars from Abu Dhabi investors with pledges to invest in China’s financial market. But his promise of big investment returns never materialized. Instead, the Abu Dhabi investors later found part of their money was used for loss-making deals, debt repayment and Guo’s personal spending, including the purchase of a yacht.