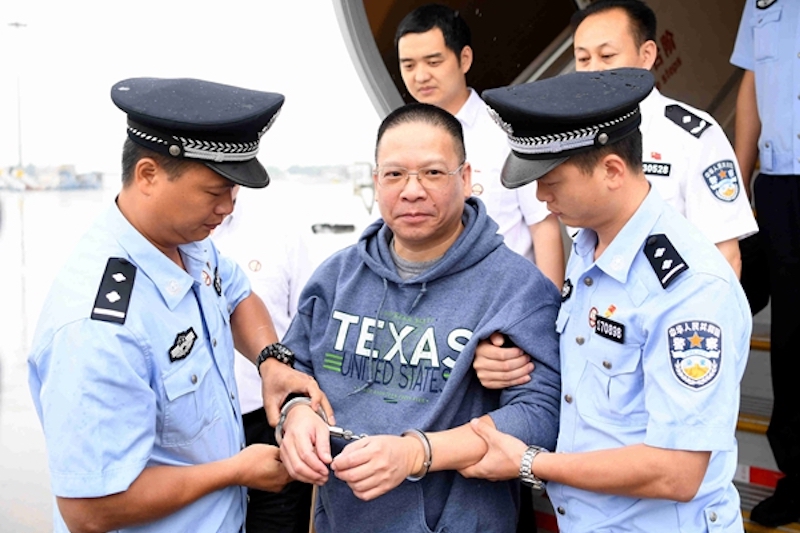 A former state bank boss who allegedly embezzled $485 million in one of China’s largest bank corruption cases was repatriated, 17 years after he fled to the U.S.

Xu Chaofan, former head of the Kaiping sub-branch of the Bank of China (BOC) in Guangdong province, was returned China from the U.S. on Wednesday under a cooperation arrangement between the two countries for law enforcement against corruption, said the Central Commission for Discipline Inspection, China’s top graft-buster.

Xu is among graft suspects who fled China and were targeted by the “Sky Net” operation, a campaign launched in 2015 as part of China’s sweeping crackdown on corruption among government officials and state company employees.

He is also the first suspect of a corruption-related crime who has been repatriated since March when a major government overhaul further strengthened anti-graft enforcement by creating a new National Supervisory Commission to work closely with the CCDI.

Xu, together with two other senior executives of the BOC in Kaiping, embezzled $485 million from the bank’s accounts starting in 1991 and transferred the assets to the U.S., domestic media reported.

Xu fled to the U.S. in 2001 and was put on Interpol red alerts. He was detained in the U.S. in 2003 under a U.S.-China joint arrangement for law enforcement against corruption and money laundering. Xu was sentenced in 2009 to 25 years in prison by a U.S. court and has been serving his time in jail until he accepted repatriation, according to the CCDI statement.

There is no extradition treaty between the U.S. and China. Agreements to hand over suspects usually involve long negotiations and complicated procedures.

More than 2 billion yuan ($300 million) illegally obtained by Xu have been retrieved, according to the CCDI. Xu will face a new trial in China on charges of embezzlement and corruption.

China has stepped up efforts to pursue dirty officials and dodgy businessmen who fled abroad. In June, the CCDI released detailed information on 50 fugitives who allegedly committed economic or corruption crimes, including names, photos, ID and passport numbers, alleged offenses and possible current whereabouts. The U.S. is the top destination of the fugitives; Canada and New Zealand are also among the main countries where fugitives may be hiding, according to the list.

The CCDI said in April that since the Sky Net operation began three years ago, 4,141 fugitives have been captured from more than 90 countries and regions. Nearly 10 billion yuan of assets have been recovered.