In Depth: The Graft Network Casting a Shadow Over Gansu 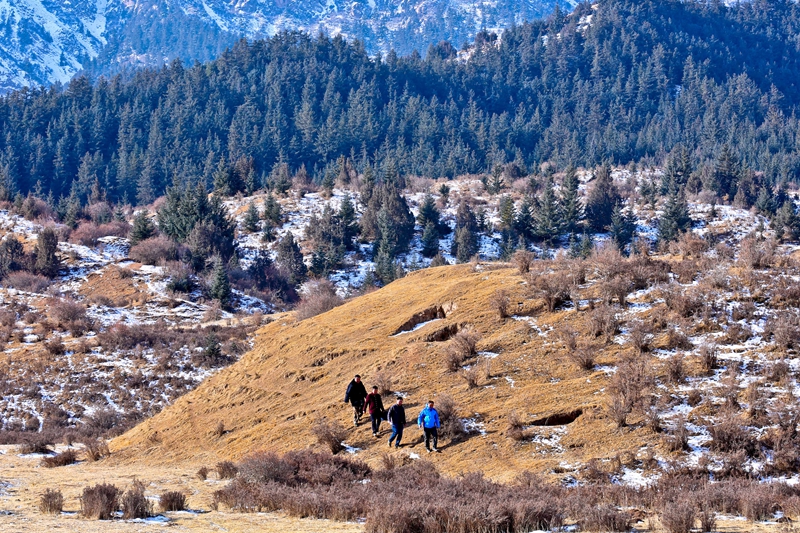 Gansu is one of the nation’s poorest and most rural provinces. Its GDP per capita is less then one-fifth that of Beijing. Photo: Caixin

* Investigators detected widespread violations and nepotism among officials in Gansu

* Gansu’s political environment has been 'severely damaged,' the CCDI said

Yu Haiyan spent more time in late 2016 walking along the banks of the Yellow River which flows through Lanzhou, a city he had overseen since 2012.

But Yu enjoyed neither the leisure of the walking nor the scenery of the northwest city as he nervously threw mobile phones, watches and other items into the fast-running stream.

This is not a scene from a spy movie but a true story as told in a documentary released by China’s top graft buster and the state broadcaster, CCTV. According to the documentary, Yu soaked his mobile phone in vinegar to destroy stored data, shredded photos and smashed luxury watches to throw away before he was detained in January 2017 by the Communist Party's Central Commission for Discipline Inspection (CCDI).

Yu, 56, was the party chief of Lanzhou, the capital of Gansu province, between 2012 and 2016. He was promoted in October 2016 to deputy governor of the province, a post he held until he was removed in January 2017 on allegations of corruption.

In April, prosecutors formally accused Yu of violating laws, including abuse of power and taking bribes.

The downfall of Yu was the first shock in an earthquake among Gansu’s officialdom that also brought down Wang Sanyun, the former party chief of Gansu. At least six other senior officials in the province have been placed under investigation in addition to Yu and Wang, while several others reportedly fled or committed suicide, according to local media.

Caixin learned that the sweeping crackdown on dirty officials in Gansu started after an inspection by the CCDI in November 2016, during which investigators detected widespread violations and nepotism among officials.

With a population of 26 million, Gansu, in the heart of China’s hinterland, is one of the nation’s poorest and most rural provinces. Its GDP per capita is less then one-fifth that of Beijing. Top leaders were shocked by the widespread corruption in the poorest region, said one person close to the investigation.

Gansu’s political environment has been “severely damaged,” the CCDI said.

As the investigations unfold, a sprawling web of graft emerges surrounding the “big tigers” Wang and Yu and linking to a large number of officials and businessmen.

Wang Sanyun, 66, was among the seven former provincial party chiefs who have been brought down by President Xi Jinping’s campaign against corruption since late 2012.

The investigation of Wang came only two months after he stepped down as party chief of Gansu after five years in the post.

Before becoming the top leader of Gansu in 2011, he spent four years as deputy party head and governor of eastern China’s Anhui province. A native of Shandong province in eastern China, he previously was deputy party chief in Guizhou, Sichuan and Fujian, following a common pattern among Chinese bureaucrats of transfers and promotions directed by central authorities.

Wang’s long career in bureaucracy helped him to build up an extensive network with officials and businesses. People familiar with Wang described him as a capable and bold leader but often harsh, sometimes rude, to subordinates. He likes strong alcohol and karaoke, sources said.

In some people’s eyes, Wang was ambitious and diligent, devoting all his life to work. But to others, he made little effort to put his promised policies into practice.

“Wang is eloquent and often delivers passionate and inflammatory speeches. But most were just lip service,” said a person from a Gansu-based media company.

Since 2012, Wang has proposed ambitious campaigns to relieve poverty in Gansu and develop pilot zones to serve businesses. But local sources said few of the plans have been completed.

In the CCDI documentary, Wang confessed to party investigators that “I’ve signed documents and held meetings but never followed the implementation.” The documentary is one of several that have been broadcast in recent years as the president’s campaign against government corruption unfolds.

But at the same time, Wang has worked closely with businessmen, local sources said. According to the CCDI documentary, many businessmen have followed Wang to do business in provinces he led. Wang has used his power to offer favors to those businessmen in exchange for money, properties and other gifts, according to investigators.

Investigators haven’t reported just how much wealth Wang may have illegally accumulated, although in December the CCDI said Wang was suspected of taking a “huge amount” of bribes. Authorities usually provide detail on the scope of corruption cases after convictions.

One of the most controversial deals promoted by Wang during his tenure in Gansu was a 57.5 billion yuan ($9 billion) investment by real estate developer Shanghai Greattown Holdings Ltd. Headquartered in Fuzhou, Fujian province, Greattown is controlled by businessman Yu Peidi, who was ranked by Forbes as the 338th richest man in China in 2015.

In 2012 shortly after Wang’s appointment to Gansu, Greattown signed contracts with Lanzhou city government to develop commercial and residential projects. To fund part of the projects, Greattown received a 10 billion yuan credit line from a local commercial bank that year.

Wang also pushed Lanzhou officials to issue mortgage discounts, taxation incentives and other preferential policies to buyers of Greattown projects to boost sales, said one person familiar with the matter.

Caixin learned that after the detention of Wang, Greattown’s Yu was asked by party investigators to assist in the investigation.

“Listed firms are (precious) resources. Only officials with ranking higher than deputy governor can play a role (in acquisition deals),” said Zhang Qi, a former executive at CEFC China.

In September, CEFC China Chairman and founder Ye Jianming was asked by authorities to assist in the investigation of Wang, Caixin learned. Ye was detained in January on allegations of economic crimes, sources told Caixin. CEFC China has been rattled by a debt crisis since Ye’s detention. Its ambitious deal to buy a 14% stake in Russia’s state-controlled oil major Rosneft recently collapsed.

Sources from Gansu told Caixin that Wang supported his relatives’ businesses in the province. Two of Wang’s nephews have deeply involved in construction projects in Lanzhou and deals with local government-backed steel giant Jiuquan Iron & Steel Group (Jiugang). After CCDI inspectors arrived in Gansu, Wang gathered his relatives to transfer and hide his assets, sources said.

“Wang collected wealth in a crazy manner,” a CCDI official said. Wang purchased or received a large number of properties as bribes, according to the official.

Unlike Wang, Yu spent most of his career in the steel industry before he was appointed to senior posts in the provincial government in 2012. A native of Zhejiang province in eastern China, he studied in Xi’an, Shaanxi province, and joined Jiugang shortly after graduation in the 1980s.

In 2002, Yu rose to deputy general manager of Jiugang. After a short departure in 2007 to fill a political post as party chief of Tianshui, also in Gansu, Yu returned to Jiugang in 2008 as chairman.

Yu cultivated an extensive network in Jiugang and helped many of his associates to find jobs in the Gansu government. According to the CCDI documentary, Yu appointed almost 100 of his former subordinates at Jiugang to senior government posts after he joined the Gansu government, and many of the appointments violated regulations.

Yu also tried to extend his network into the CCDI. In 2010, he met Ming Yuqing, a CCDI official who oversaw the commission’s inspections in southwest and northwest regions. Yu helped Ming’s son with business opportunities in Gansu, according to the CCDI documentary.

In a routine inspection in Gansu in 2014, a CCDI team received reports accusing Yu of abusing power. Ming helped Yu settle the issue, according to the documentary. In November 2016, Ming himself was placed under investigation by the CCDI.

Without Ming’s help, Yu asked his connections in the Lanzhou public security bureau to install listening devices in the office of a CCDI inspection team when it visited Gansu in 2016, trying to spy on the team’s work, according to the CCDI.

One month after Ming’s detention, Yu’s secretary Jin Jinzhe, who helped Yu in his liaisons with Ming and other officials, was also detained by the CCDI. Sensing the danger, Yu started to dispose of his assets. As with Wang, authorities haven’t outlined the scope of Yu’s alleged corruption.

The CCDI said in a statement that Yu abused power and violated rules in official appointments to benefit his associates and colluded with businessmen to seek illegal profits.