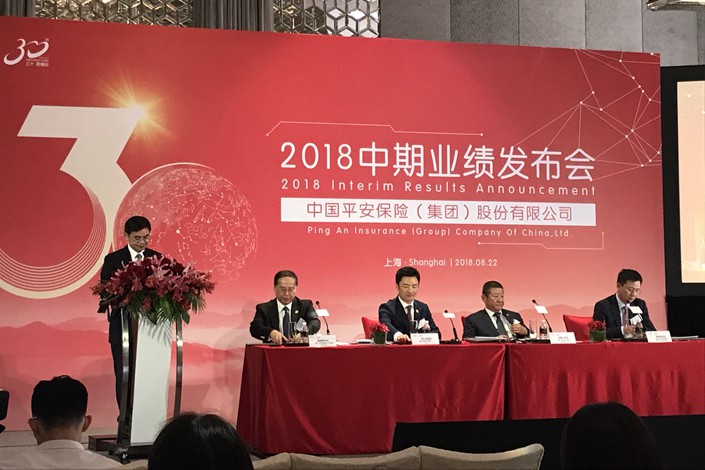 Written premiums, all premiums received from policies underwritten by Ping An, grew 20% year-on-year to 408.2 billion yuan in the first six months of 2018. The value of its new business, a major indicator of growth for insurers, saw little change from the first half of 2017 at 38.75 billion yuan. However, this was an improvement over the second half of 2017 and the first quarter of 2018, when the value of new business shrank on an annual basis.

Ping An’s strong results came despite the government’s year-long crackdown on risky investments made by some of country’s insurance giants, illustrating the relatively strong position of big players with a solid client base under the campaign.

Ma Mingzhe, the insurer’s founder and chairman, said that the company has “boosted business value and results by promoting protection products” as the government urged insurers to do in the first half of 2018.

Lee Yuan Siong, Ping An’s deputy CEO, told reporters at a Wednesday press conference that regulatory impact on Ping An’s insurance business has been negligible since April, and he expects to see a continued strong performance in the second half.

The insurer’s retail customers grew 25.2% in the first half, hitting 179 million, the filing showed. While its internet users, many of which are also clients of some of the group’s subsidiaries, rose 20.6% to 485 million, Ping An said.

Xie Yonglin, president of Ping An Bank, said the lender would reshape its strategy for its private banking and wealth management business in the future. Over the course of the last two years the bank has shifted its focus from corporate to retail lending, with the retail side of things now accounting for 68% of its total revenue.

The group’s technology businesses, which gathered public attention since it announced last year that four of its startups would list, saw strong growth. Lufax, an online lending platform, and Ping An Good Doctor, its online health care platform, both posted surges in business growth during the first half of 2018.

This is the first time Ping An Good Doctor has released financial results after raising some $1.12 billion in its initial public offering in Hong Kong earlier this year.

However its securities and trust business posted slower growth, as stock market sentiment dragged the benchmark index to bear market territory, and trusts’ off-balance sheet business was tackled as part of a broader national deleveraging campaign.

Shares of the Hong Kong-listed company closed up by 3.48% on Wednesday, while its Shanghai-listed shares rose 2.54%.