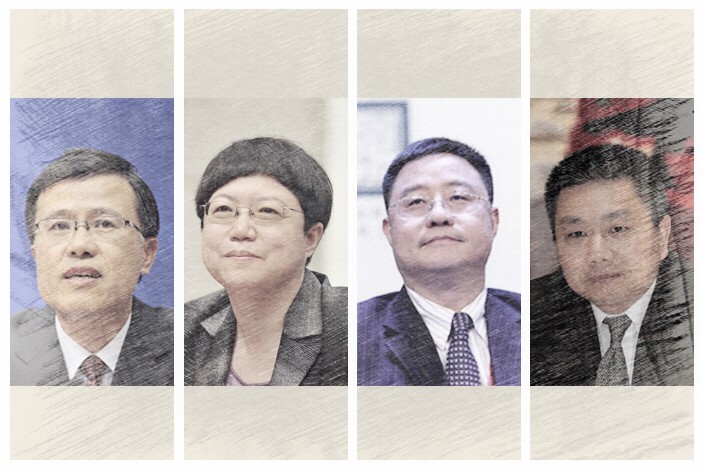 Regulatory shake-up starts to shape up: More details on the merged banking-insurance super regulator emerged this week, giving a much clearer picture of what the body will look like.

A pointier pyramid: Guo will have a slimmer leadership team, losing three of his seven deputies — although we don’t know who’s on the way out yet. But he’ll make up for his lost deputies with four new “chief officers” below them, equal in rank to “assistant chairman,” a post most infamously held by Yang Jiacai (杨家才) at the former China Banking Regulatory Commission (CBRC). Yang was sentenced to 16 years in prison last month for accepting tens of millions of yuan in bribes.

Here are the likely candidates, and their roles. There are no big surprises here — all have plenty of experience. As expected, controlling risks has been bumped up in importance.

Risk control: Xiao Yuanqi (肖远企), former director of the CBRC’s prudential regulation bureau. Xiao’s got a fairly international background, with an MBA picked up in the U.K. and experience at the central bank’s New York office.

Inspection: Yang Liping (杨丽平), former director of the CBRC’s large-scale bank department, with plenty of time in several other departments at the banking regulator.

Legal affairs: Liu Fushou (刘福寿), former legal affairs head of the CBRC. Liu should have a good idea of what happens when insurance meets the law — he helped draft China’s Insurance Law in 1995.

More losers lower down: The two former regulators’ combined 37 central departments will shrink to 26. Consolidation will repeat itself at regional and local levels. This means many heads are going to roll. “As the integration unfolds, competition among midlevel officials will be very fierce,” a local banking regulatory official previously told Caixin.

Why this is all happening: Sharper (and more disciplined) teeth are needed to scare China’s unruly financial sector into submission. Lax oversight and fragmented rules allowed financial institutions to give regulators the runaround, as well as encouraging corruption — Xiang Junbo (项俊波), former head of the CIRC, and the aforementioned Yang Jiacai are the most famous cases.

PSB Rundown: The PSB certainly isn’t China’s biggest bank by assets — but it’s probably the most ubiquitous, with around 40,000 outlets serving about half a billion retail customers.

Telecoms Connections: Brace yourself — this gets a little complicated:

Zhang’s colleague at China Post Group is its new chairman, Liu Aili (刘爱力), who, also last month, moved over from being president at China Telecom, another of the big three.

Rumor has it that simultaneous moves at the top of these two telecoms giants signal an upcoming merger — just in time for efficiency gains during the rollout of 5G networks, the next generation of wireless technology. There’s precedent — the last round of mergers was just before the 3G rollout in 2008.

Another chapter in the Guo saga: Five senior employees of the colorful billionaire fugitive Guo Wengui (郭文贵) pleaded guilty to charges of coercion in a business deal and embezzlement, in a court in the northeastern seaport of Dalian.

Why do we care: The case has brought to light details on how Guo leveraged government connections in his financial dealings before he fled China.

More fallout from the troubled bad bank: The chairman of a casino development company who had close ties to the scandalous “bad bank” China Huarong Asset Management Co. Ltd., was detained by police in Cambodia this week.

Landing International Development Ltd. said in a filing on Thursday that it has been “unable to contact or reach” its chairman, Yang Zhihui (仰智慧). Yang was very close to Bai Tianhui (白天辉), the former general manager of Huarong’s Hong Kong-listed arm, sources told Caixin.

Some background: Huarong was established in 1999 to take over toxic assets in China’s banking industry. Earlier this year, its former chairman and Communist Party chief, Lai Xiaomin (赖小民), was removed for “serious violation of rules and the law”; 270 million yuan of cash, weighing nearly 3 tons, was found stashed across several properties he owned. Here’s more from Caixin about Huarong.