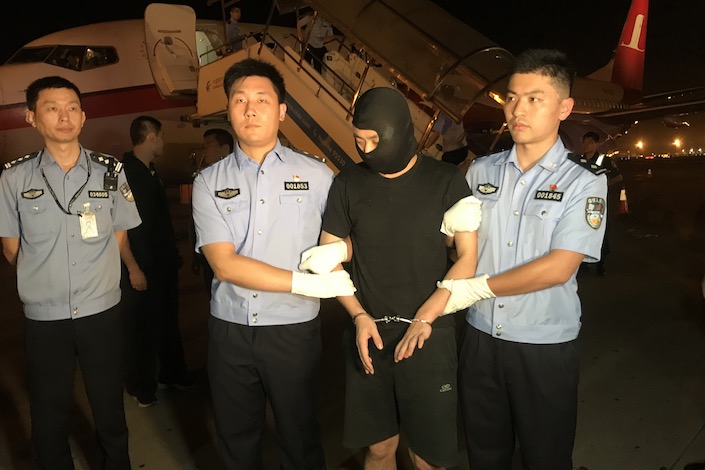 Zhu Yidong, his face obscured by a black mask, is escorted by policy officers at the Shanghai Pudong airport Aug. 29. Photo: VCG

The boss of a Shanghai-based wealth management company has been detained by Chinese police after he fled the country and left behind repayment obligations to investors totaling billions of dollars.

Zhu Yidong, chairman of Fuxing Group, was arrested abroad and brought back to China on Wednesday, according to the Shanghai Public Security department. Zhu faces investigations of alleged financial violations including stock market manipulation.

Zhu was escorted by police officers when he landed at Shanghai Pudong International Airport, footage from state broadcaster China Central Television (CCTV) showed. Zhu has traveled to five countries over the past two month and cut off all contact with home to escape police, CCTV reported.

The Fuxing scandal is one of the biggest crises hitting China’s private equity market amid the central government’s efforts to crack down on financial risks and dodgy market practices. Zhu’s disappearance spurred investors to hold protests demanding that regulators and banks that provide custodian services to Fuxing protect their investments.

Shanghai police said the China Securities Regulatory Commission has set up a special task force to investigate the Fuxing allegations while the public security department is probing the company for criminal offenses. Authorities are assessing Fuxing’s assets and working on plans to compensate investors.

Zhu became unreachable in late June after he missed interest payments on several loans, Caixin has learned. His company, Fuxing, has businesses extending across several sectors, including finance, rare minerals, health care, trade and media, according to its website.

Fuxing controls four private equity funds which have registered a total of 160 asset management products to raise money from private investors and banks. Fuxing said on its website that the group managed assets worth more than 35 billion yuan ($5.13 billion) in 2017, with trading volume topping 30 billion yuan.

Caixin learned in July that most of the capital raised through the private funds was funneled into sectors in which Fuxing had businesses, but the quality and substance of these projects are questionable.

Zhu had suffered from a cash crunch since January in the wake of a report by CCTV that alleged Fuxing hired traders to use hundreds of accounts to manipulate the stock price of a Shenzhen-listed company since late 2016.