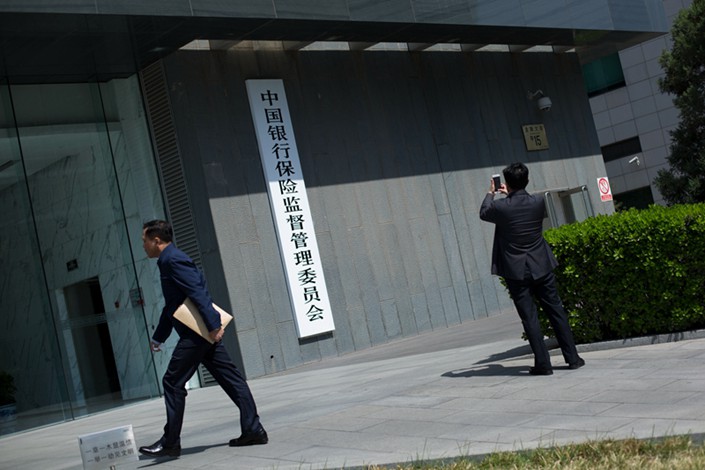 * The ‘case investigation’ unit of the watchdog responsible for on-site bank checks will be made independent, after a series of high-profile fraud cases in recent years highlighted lax regulation

* Another regulatory unit will be tasked with monitoring shareholding structures, to ensure that the country’s limits on ownership of financial institutions are no longer flouted

(Beijing) — Unscrupulous banks and owners of financial institutions will find themselves under greater scrutiny as the planned reorganization of China’s newly merged banking and insurance regulator moves ahead over the next two months.

The focus of the restructuring shows how the government is getting more serious about tackling the problems of fraud, embezzlement and the flouting of rules designed to ensure the stability of the financial system.

“For a very long time, regulators … have failed to perform their duties,” a senior financial regulator had previously told Caixin.

The China Banking and Insurance Regulatory Commission (CBIRC), which was established in April by combining the country’s bank and insurance regulators, plans to upgrade a division that specializes in investigating bank misconduct as well as revamp an existing department to scrutinize the ownership of financial institutions.

The proposals are part of the CBIRC’s blueprint for reorganizing the more than 40 departments that it inherited from its two predecessors. Late last month, Chinese media widely reported that the State Council, or cabinet, had approved the plan. Sources told Caixin that the CBIRC is scheduled to complete its reorganization by the end of September as part of a broader government overhaul.

Under the plan, the CBIRC will spin off the “case investigation” unit of the bureau in charge of on-site bank checks, making it an independent division. The purpose of the change is to improve risk management at banks and ensure that they get punished for breaking the rules.

Due to lax regulation, which sometimes involves officials turning a blind eye to freewheeling deals that violate the rules, China’s banking industry has suffered a series of fraud cases in recent years.

In one of the industry’s biggest scandals, the former chairman of Hengfeng Bank, one of the country’s 12 national joint-stock lenders, fell under official investigation in November after reports surfaced that top executives at the bank had embezzled more than 40 billion yuan ($5.8 billion) over several years. The executives used the money to fund a takeover attempt of their own bank which they tried to conceal through complex shareholding structures involving multiple companies.

In January, the Chengdu branch of Shanghai Pudong Development Bank was slapped with a 462 million yuan fine after it was found to have worked with seven real estate and mining companies to set up nearly 1,500 shell companies to transfer risky debts to cover bad loans.

Even big state-owned banks have been named and shamed. Industrial and Commercial Bank of China, the Postal Saving Bank of China and several rural lenders were fined a combined 52.5 million yuan earlier this year as punishment for a 19 billion yuan pledged loan fraud.

A few of the regulator’s local branches have been held accountable for scams within their jurisdictions. Internal CBIRC documents seen by Caixin showed that officials failed to follow up on information about risky bank practices, did not report lender misconduct in a timely manner, and granted regulatory ratings for banks that did not reflect reality.

The CBIRC’s reorganization also includes the overhaul of a unit charged with drafting development strategies and policies for the insurance industry. Under the proposed change, the unit will focus on the corporate governance of financial institutions, paying particular attention to shareholding structures.

China’s leadership has made private financial conglomerates one of their main targets in a campaign to control “major risks” in the economy. These companies built up debt aggressively and used financial institutions they controlled as cash machines to finance spending sprees over the past few years that snapped up assets, jeopardizing the stability of the country’s banking system.

CBIRC Chairman Guo Shuqing said at a meeting in April that some of the major corporate governance problems at financial institutions included opaque ownership structures and lax boards of directors.

Tomorrow Holding’s controller, Xiao Jianhua, has been assisting authorities in unspecified investigations since January 2017. Meantime, the firm has been selling off assets.

Anbang, previously controlled by high-flying tycoon Wu Xiaohui, was taken over by the state in February after Wu was placed under investigation for fundraising fraud and embezzlement. He was sentenced in May, but is appealing.