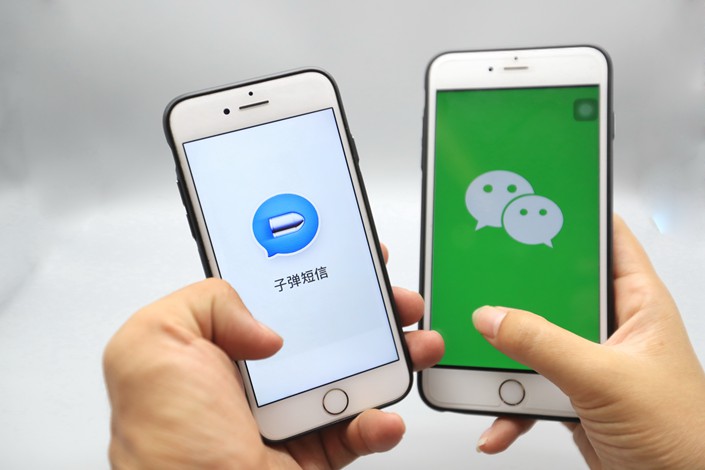 Tencent Holdings Ltd., which makes the WeChat app, has denied reports that it is seeking to invest in the new Bullet Message app. Photo: IC

(Beijing) — The flamboyant investor behind a recent hit messaging app has claimed that it has attracted “investment interest” from the owner of its archrival, WeChat — the ubiquitous social media platform that boasts more than 1 billion users.

Since its Aug. 20 launch, Bullet Message has racked up 7 million users. From Aug. 23 to Sept. 4, it shot up Apple Inc.’s App Store charts in China to hit No. 1 as the most downloaded free social-media app, according to app tracker App Annie. By Tuesday, the app had lost some of its momentum, falling to No. 8.

Tencent responded that its employees had indeed conversed briefly with Bullet Message staffers on WeChat, but denied that it was looking into investing in the new app.

Luo, a former English teacher and a charismatic public personality, made a name for himself after defiantly smashing malfunctioning Siemens AG appliances in front of his company’s offices to protest what he called the poor quality of the German manufacturer’s products.

Caixin has learned (link in Chinese) the majority of Bullet Message users own a Smartisan smartphone, whose target buyers are limited to a smaller niche market. A number of users who have installed Bullet Message told Caixin they have managed to add dozens of friends on the app, but only four or five of them have remained active so far.

In another social media post last week, Luo declared his intention to spend 1 billion yuan ($146 million) over the next six months to increase Bullet’s user base to 100 million.

Luo has acknowledged that he doesn’t expect that Bullet Message’s arrival will inspire people to uninstall WeChat. Nonetheless, he will continue to beef up his app’s features. For example, the developer plans on incorporating the mobile payment platform Alipay into the app. WeChat contains its own popular payment service, WeChat Pay, which is run by Tencent.